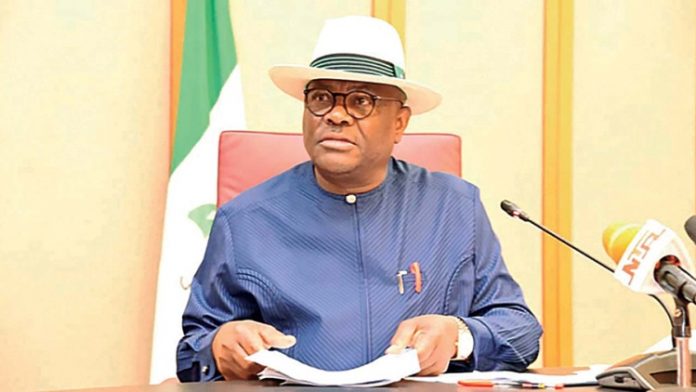 The Rivers State Governor, Nyesom Wike, had ordered all the 23 Local Government Area (LGA) Chairmen in the state to hire bulldozers and destroy every identified illegal crude oil bunkering and artisanal refinery sites in the state.

The governor also asked the Rivers State Commissioner of Police, CP Eboka Friday, to provide adequate security for the local government area chairmen as they embark on the mass destruction of illegal refinery sites across the State.

According to a statement issued by the Special Assistant to the Governor on Media, Kelvin Ebiri, the order was given by Wike after meeting with the 23 Local Government Area Chairmen, the State Commissioner of Police and the Commandant of the Nigeria Security and Civil Defence Corps (NSCDC) in Port Harcourt.

The governor threatened to personal report to the Inspector General of Police, the Commandant General of the Nigeria Security and Civil Defence Corps (NSDC) and the Chief of Army Staff, any of its security personnel implicated in illegal crude oil bunkering and artisanal refinery activities in the state.

This is as he is mindful of the fact that the cartel behind these illicit businesses will try to compromise unscrupulous security agents as the state government intensifies the war against illegal refineries.

Wike said with the receipt of the list of identified illegal refinery sites, the state government will provide financial support to the local government area chairmen to hire bulldozers and swamp buggies for the purpose of destroying all the sites.

He said, “I will not relent in this fight. And all of you should hire bulldozers. All those areas where the illegal refinery sites are in the bush, in the creek, clear the place.

Government will give you some money to go and hire bulldozers to go and clear the sites so that they will know we are serious.

‘’One thing I want to say and which is very clear, and like everybody knows, I am not against anybody making money. But, we cannot allow people to make money, while others are dying.’’

Wike acknowledged that since the State government intensified the fight against illegal refinery operators, who are primarily responsible for the discharge of impure carbon particles resulting from the incomplete combustion of hydrocarbons into the atmosphere, the air quality in parts of the state has improved remarkably.

The governor said, “You know in Nigeria, we don’t believe that anything can happen. We don’t take government seriously, but in our own case, they have no choice, they’ll take us seriously.’’

Recall that earlier in January, Governor Wike had raised alarm over the operation of illegal refineries and oil bunkering by some unscrupulous individuals and some security personnel, with its attendant environmental issues.

Wike who accused a Divisional Police Officer in the state of operating an illegal refinery, in a New Year broadcast listed the names of the various individuals involved in such illegal activities.

He had also earlier on January 14, 2022, issued a 48-hour ultimatum to the 23 local government chairmen to provide him a comprehensive list of all illegal refinery sites and their operators within their respective jurisdiction.

COURT TO DETERMINE TRADEMARK WAR BETWEEN RITE FOODS AND NBC