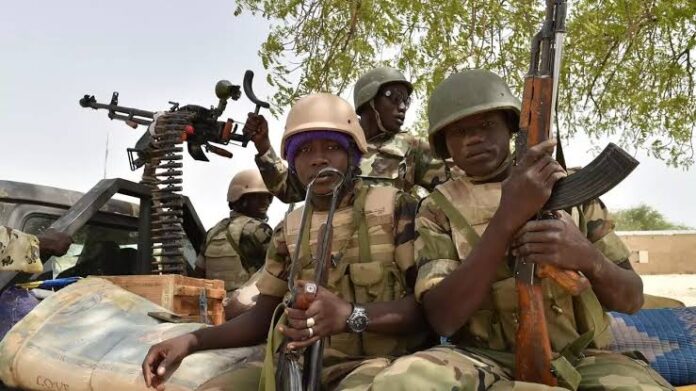 He said this during the handing and taking over ceremony at Army Headquarters, Abuja.

General Nwachukwu was appointed the new Army Spokesperson in the latest appointment and redeployment of officers in Nigerian Army, following the appointment of the new Chief of Army Staff (COAS) Major General Farouk Yahaya by President Muhammadu Buhari.

While, taking over from the outgone Spokesperson, Brigadier General Mohammed Yerima, the new Spokesperson said: “Permit me to note here, that it is an indisputable and very well established fact, that the sword or gun cannot alone, provide a panacea to the complex and multifaceted security challenges that characterize today’s world.

“I must therefore, make haste to say that the complex nature of these security challenges requires multi-disciplinary approach and a conglomerate of stakeholders of which the media is a very vital one.

“In decisively overcoming these challenges, the NA and the media must be partners in progress to surmount this security threats in order to berth the peace and tranquility we all earnestly desire as a people and nation”.

He said he is not oblivion of the responsibility of his office which is to project the activities of the NA with the objective of galvanizing public goodwill and support for the NA, as its strives assiduously to surmount contemporary security challenges bedeviling our nation.

Thanking the COAS for finding him worthy of the appointment, General Nwachukwu, pledged to promote the core values of the Nigerian Army amongst officers and soldiers of the Directorate of Army Public Relations.

According to him, “I wish to most respectfully thank the Chief of Defence Staff, Gen Lucky Irabor for his immense support and encouragement during my tour of duty as the immediate past Acting Director Defence Information of the Armed Forces of Nigeria.

“Let me use this medium to once again, express my sincere gratitude to the Chief of Army Staff for my appointment, while assuring him of my unalloyed commitment to his vision for “A professional Nigerian Army, Ready to Accomplish Assigned Missions within a Joint environment in Defence of Nigeria”.

He appreciated his predecessor for the laudable feats he recorded during his tenure, and also assured him of his commitment to consolidate on his successes.

He equally lauded members of the fourth estate of the realm for their individual support and cooperation during his tenure as the Acting DDI and implore them to remain steadfast as they carry out their essential role of educating and informing the public, thereby bringing the society up to speed on the happenings in the defence and security sector.

“I urge you to use your reportage and medium to positively shape public perception and opinion towards endearing national defence and security institutions to the public.

“This, I believe will enable the harnessing of requisite elements of national power to confront our common adversaries,” he concluded.

Earlier in his remarks, the outgone Spokesperson Brigadier General Mohammed Yerima tasked officers and soldiers of the directorate Directorate of Army Public Relations to extend the same support they gave him to his successor.

STARTLING REVELATION: THE PROBLEM OF DRUGS IN NIGERIA IS ENORMOUS, WE...