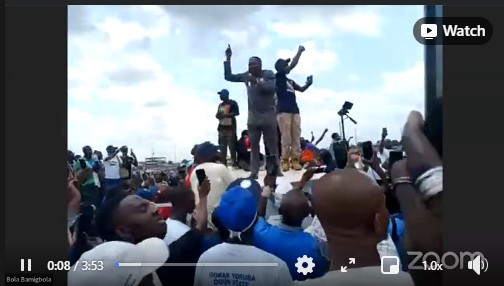 Reports gathered that popular Yoruba activist, Sunday Igboho has successfully escaped another ploy by the DSS to attack him during the Yoruba nation rally that took place in Osun yesterday.

His media aide, Koikimedia uploaded a video of a man whom he described as a DSS officer sent to bug and take pictures of Sunday Igboho’s vehicle and plate number during the protest.

He explained that the man confessed following an interrogation with him

During our interrogation with him he said that he was sent by the Federal Government working on behalf of DSS to target one person Chief Sunday Igboho vehicles.

He confirmed to us that the mission was to bug and take pictures Chief Sunday Igboho’s vehicles plate number.

We had to do a quick security check using our own GPS DETECTOR to make sure the vehicles was not bug.

We would give further details after the report from our forensic expert.