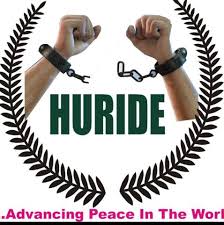 The Central Bank of Nigeria (CBN) governor was said to have frozen and freezed the accounts of the alleged sponsors and promoters of the recent protest.

But HURIDE in condemning the action of the government called for the immediate sack of the CBN Governor, Godwin Emefiele, and the Inspector-General of Police (IG), Adamu Muhammad Abubakar over their unprofessional disposition against the Nigerian citizens.

In a statement signed by the chairman, Board of Trustees of HURIDE, Dede Uzor A Uzor in FCT Abuja weekend, said the secret arrest of the protesters and freezing of their individual accounts were clear violation of their fundamental rights and attempts to limit free speech which is an inherent right of citizens in a democratic environment.

They noted that the account of these people were frozen without their knowledge, almost two weeks before CBN got purported court order to effect the criminal freezing of their individual accounts.

The group also queried the wisdom and power of the court to freeze their accounts for six months without even hearing from them to ensure fair hearing, accusing the judiciary of helping the current despotic regime to sustain despotism and impunties in the highest order.

“We most despicably condemn the atrocious and obnoxious freezing of the account of the protesters and their unwarranted arrest and prosecution of the defenceless Nigerians without justifiable reasons.

It is illegal, unconstitutional and a breach of trust on the part of CBN to champion the freeze of the account of citizens who were merely exercising their freedom of expression before government glaringly introduced violence that triggered off the hijack of the protest by miscreants” who unleashed terror with catastrophic human destruction, said the group.

“They should concentrate on arresting agents of government who introduced violence into the protest and the hoodlums who infiltrated the protesters and hijacked the protest with monumental lost of lives and properties” said the group.

HURIDE said it would amount to miscarriage of justice for the government to try to muscle the young Nigerians who want to achieve positive change for their country, noting that this government and indeed All Progressives Congress (APC) can never stay in power forever and if they block the opportunity to better the country it will sooner or later haunt them.

The group said the preoccupation of this government should be how to meet the demands of Nigerian youths to avoid a repeat of the protest which could be catastrophic.

“The Muhammad Buhari led Federal Government should arrest those soldiers who killed innocent and defenceless and unarmed Nigerians youths at Lekki toll gates, those who burnt cars in Abuja and those who were behind the counter protest that was peaceful” HURIDE warned.

WHAT TO CONSIDER BEFORE CHOOSING A PLATFORM FOR YOUR ONLINE STORE