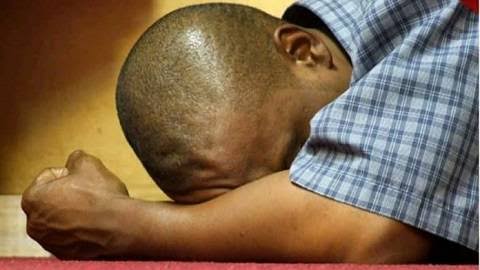 A 43-year old man, Rasak Ali, has landed in trouble after he allegedly lured a 4-year old girl, penetrated her private part with his fingers and defied her in the process in Lagos State.

Report had that the suspect, Ali, has told the Police that he only checked her private part with fingers, but did not explain why he did so, which has landed him in trouble.

The incident happened at Boys Town Bus Stop, Ipaja area of Lagos, where they reside.

He has been arrested for sexual penetration.
The Police alleged the suspect to have lured the little girl into his apartment, removed her pant and inserted his fingers inside her private part in order to satisfy his sexual desires.

However, he was caught in the dastardly act and handed over to the Police, who transferred the matter to the Gender Section of the Command for interrogation.

During investigation, the suspect claimed he never raped her because he knew she is a minor but only checked her private part with his fingers.

The Police found culpable and subsequently charged him before the Ogba Magistrates Court for penetration with fingers, which is statutory rape under the Criminal Law.

When he was arraigned, the Court did not take his plea after the prosecutor, Supol Victor Eruada, asked the Court to refer the matter to the DPP for advice.

The Presiding Magistrate, Mrs. M.O. Tanimola, ordered his remand in correctional centre at Kirikiri town, Lagos, without an option of bail and then directed the prosecutor to duplicate the file and send it to the DPP.

The matter was adjourned till 21st January, 2022, for the report of the DPP to be available, which will determine if the matter will be transferred to the High Court or not over jurisdiction.

However, Ali will remain in custody pending availability of the report of the DPP as the issue of bail will not be granted to him because of the nature of the alleged offence he committed.

UBA AHEAD PEERS IN STIMULATING ECONOMIC GROWTH IN AFRICA THROUGH CONSUMER...

JUST IN: ANOTHER ONE MONTH OLD BABY RESCUE IN LAGOS BY...