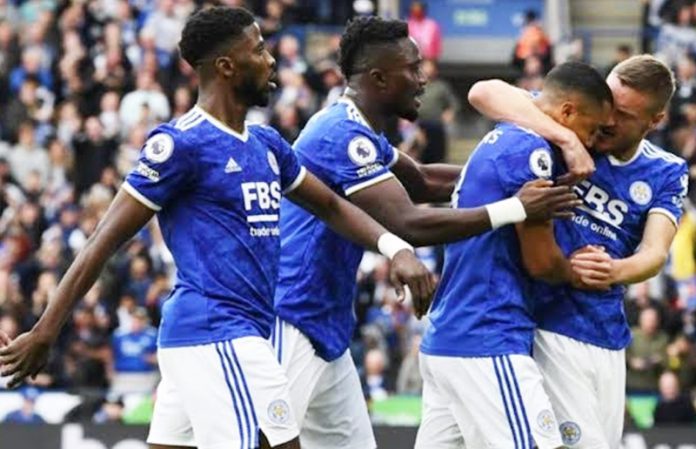 Nigerian international, Kelechi Iheanacho, scored his second assist in the English Premier League this season as Leicester City came from behind to defeat a floundering Manchester United 4-2 at the King Power Stadium.

Ole Gunnar Solskjaer side have remained so inconsistent and gradually signaling the end of the Norwegian reign at Old Trafford was getting nearer.

The victory was Leicester’s back-to-back Premier League wins over United for the first time in their history (the Foxes won 2-1 at Old Trafford in their last meeting in the 2020/2021 season).

It also ended United’s 29 game unbeaten away record in the process.

Brendan Rodgers’ side have beaten United at the King Power stadium for the first time since 2014 (Leicester won 5-3).

Mason Greenwood opened scoring for United on 19 minutes as he received the ball on the right flank, dribbled inside and rifled the ball into the far top corner.

Leicester equalised in the 31 minute as Iheanacho robbed Harry Maguire off the ball, squared it to Youri Tielemans who wonderfully swept his effort into the top corner from 18 yards with his first touch.

Iheanacho has now been directly involved in 23 goals in his last 26 games for Leicester in all competitions, scoring 17 and making six assists.

The Super Eagles star was later replaced by Patson Daka in the 77th minute.

With 12 minutes left in the game Leicester went 2-1 up thanks to Caglar Soyuncu who was first to the loose ball from a corner and proded in from close range.

Four minutes after Leicester goal United drew level as Marcus Rashford who is making his return from injury, made a clever run in behind and latched on to Victor Lindelof’s ball, smashing it past Kasper Schmeichel.

Just one minute after United’s equaliser Leicester took the lead again going 3-2 ahead with Jamie Vardy lashing in a superb half-volley moments after the restart.

And in the 91st minute Leicester secured the three points with substitute Daka who was on hand at the back post to tap in and become the first ever Zambian to score in the Premier League.

The win took Leicester to 11th position on 11 points while United stay in fifth spot on 14 points in the league table.

And in other results on Saturday, Manchester City beat Burnley 2-0 at the Etihad, Wolverhampton Wanderers came from 2-0 down to beat Aston Villa 3-2 away, Norwich were held to a goalless draw by Brighton at Carrow Road while Southampton pipped visiting Leeds 1-0.

PDP chides Buhari over use of cooked-up statistics