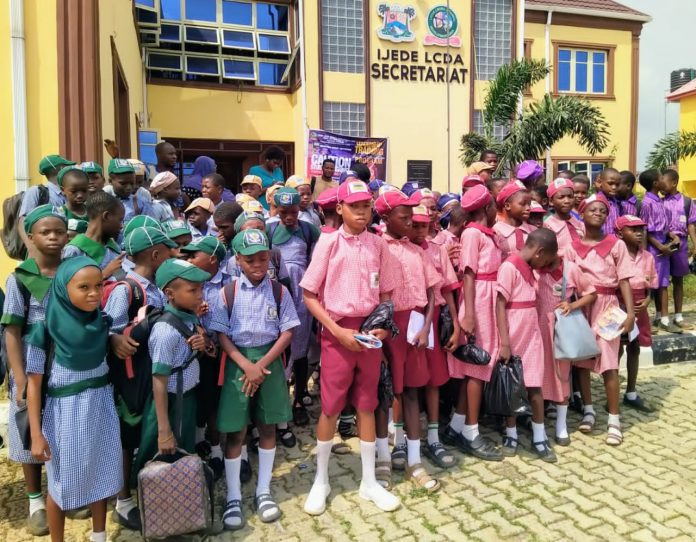 Executive Chairman of Ijede LCDA, Hon. Motunrayo Gbadebo-Alogba has called on students to be better role models for their parents and community as the yuletide season draws close on the turf of cool breeze and aquatic splendour.

The Council boss, speaking at the maiden edition of a leadership and orientation program organised for public schools by the LCDA and Ikorodu News Network (INN), enjoined pupils to abstain from every aspect of social vices to keep her community free from cynical effects.

Represented by her vice-chairman, Hon. Femi Kareem, the pupils were taught that every leader of tomorrow must be ready to comprehend and follow optimistic strides to create a favourable corridor for the generation unborn.

Urging students to be security mindful about their vicinities, Hon. Femi Kareem advised the young scholars to imbibe the habit of asking questions whenever they’re faced with odd scenarios in their immediate environment.

He continued, “You should be apt to say something if you see anything which is not part of your everyday formalities and constructive actions”.

“Understanding that as a student, your first place of knowledge is your home and second is your school, every order pattern of influence must be questioned and honestly verified before accepted”.

“As young lads, you must remember that It takes a good follower to become a better leader, listening very well to your parents and teachers will prevent you from the hostile side of life which harbours guilt”.

Appreciating Ikorodu News Network (INN) for coming up with such a laudable educational initiative, Hon. Femi concluded by disclosing that more insightful programs will be organised in the council to enhance its educational sector.

Highlighting the numerous forms of social vices, Mr Ajayi Taiwo from the National Orientation Agency explained to students that Social vices are bad traits, unhealthy, and negative behaviours that are not in the morality of the community and are frowned upon by members of society.

According to Mr Ajayi, Social vices are considered abnormal behaviour in society that violates social norms and expectations.

“Indicators of social vices stem from as small as dressing inappropriately, to drinking alcohol, smoking, abusing drugs and other catalysts that can ultimately induce an individual to constitute nuisance in the community” He said.

“It is assumed that poverty is a disease that can make people engage in activities that are not legal, as students you must not allow the fact that your parents don’t have money to push you into the hands of bad friends”.

“Be contented with your possession per time because there is time and season for everything in life. That wisdom will guide you from indulging in indecencies” He added

Before the question and answer session of the program, Mr Owolabi Ayodeji Eric a special guest at the event, motivated the students to concentrate on their studies as a way of not getting deflected by the problems of existence.

Mr Ayodeji, Head Of the Education and Library Service Department in Ijede LCDA, complimented the executive chairman’s speech by exhorting the pupils to remain observant and inquisitive of their surroundings, asserting that the typical safety slogan ‘If you see something, Say something, should be their watchword on daily basis.

In the latter, Ikorodu News Network (INN) Coordinator, Eromona Michael, advised students to avoid peer pressure which is a major cause of youth involvement in social vices, adding that students spend more time with their friends in school or at home.

Commending the chairman of Ijede LCDA for making good her cooperative feat to actualise the program, He concluded by encouraging teachers not to relent in emitting ample attention to keep the pupils on guard to take helpful decisions against crimes.

HARVARD ECONOMIST SEES EMEFIELE AS THE NEXT OBASANJO ~ Fame...