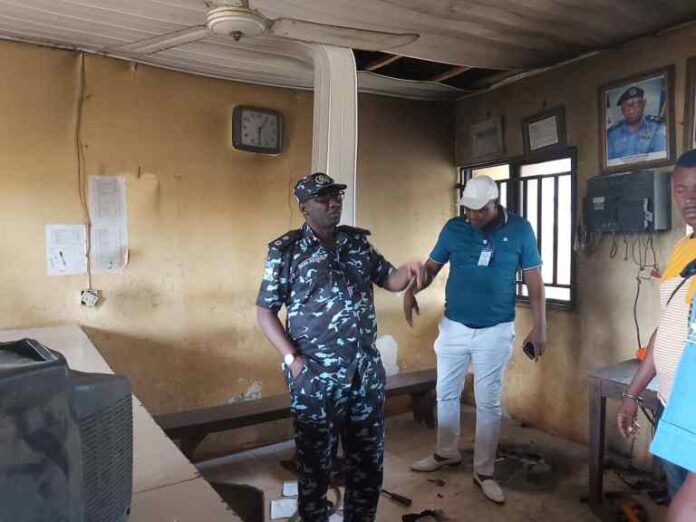 CP Nasiru inspecting the level of damage in the division.

The Imo State Commissioner of Police, Nasiru Mohammed has warned those responsible for the attacks on police stations and personnel to stop the barbaric acts.

The CP warnings was released and e-signed by the command’s spokesman, SP Ikeokwu Godson Orlando stated, “On the 20/03/21, at about 1830hrs hoodlums whose number could not be ascertained, attacked the Divisional Police Head quarters, Isiala Mbano, shooting sporadically, operatives of the Division successfully repelled them. After the encounter it was discovered that the hoodlums destroyed some doors and windows.

“However, no arm(s) was taken away. Regrettably, one Inspector, whom was on duty at time of the attack, gave up the ghost while receiving treatment as a result of injuries sustained during the melee.

Meanwhile, the COMMISSIONER OF POLICE IMO STATE, CP NASIRU MOHAMMED, has visited the station to evaluate the extent of damage.

The CP decry the level of damage in the Division, which he termed as barbaric.

He further encouraged officers not to deterred by this attack, but be charged to brace up the challenge and ensure policing activities continues in the area.

He warned whoever that is responsible for all the attacks to desist from it, or be prepared to face the law.