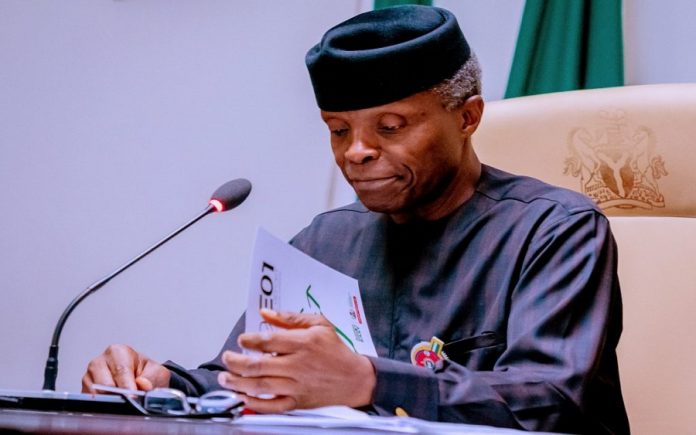 Vice President, Yemi Osinbajo said that 61 years after Nigeria’s independence, it has since become the most educated and most entrepreneurial nation in Africa, citing that 10 of Nigeria’s 36 States have larger economies than at least 15 African countries.

The Vice President disclosed this at the 61st Independence Anniversary Inter-Denominational Church Service and the 45th Anniversary Service of the Christian Association of Nigeria (CAN), held at the National Christian Centre, Abuja, themed `The vision undefeated,’ on Sunday.

“Let me begin by delivering to the Christian Association of Nigeria, the warm felicitations of President Muhammadu Buhari on this occasion of the 45th anniversary of the Association,” he said.

“He has asked me to commend the work of CAN, especially within the Nigeria Inter-Religious Council (NIREC) to ensure brotherliness and peace amongst all Nigerians, regardless of faith; congratulations today on behalf of the president.

“I have titled my remarks today – The Vision Undefeated,’’ he said.

Osinbajo stated that 61 years ago, Nigeria’s founding fathers laid out a vision, that the many nations and ethnicity, North and South of the Niger, 300 languages or more, differing tribes, and religions, would, by the grace of God, become one nation.

Osinbajo said the founding fathers had a vision that Nigeria, with its diverse strengths and gifts, would become a major regional force.

“And that these United Nations may become the largest aggregation of black people on earth. A beacon of hope to all peoples of African descent, long bruised by the afflictions of slavery and colonial exploitation. Nigeria will be the reaffirmation of their dignity and a tonic to their spirits.

“The Lord blessed the vision and prospered the land with richness in oil, in gas, in minerals of every hue; in fruit trees, in palm trees, in crops of every kind, in the savannah and forests, arable land, seas, rivers, and the riches embedded in them.

“That vision of our forebearers is in the words of our National Motto: Unity and Faith, Peace and Progress,” he said.

He added that Nigerians had worked that vision, through thick and thin, from subjection to colonial monarchy, to a sovereign republic, to civil rule to military rule; and even despite fighting a bitter war amongst brothers that cost millions of lives and left deep scars,

“we have since become the most educated and most entrepreneurial nation in Africa. 10 of our 36 States have larger economies than at least 15 African countries. From our ranks, we have the most accomplished men and women, in the arts, the sciences, sports, technology, and commerce.”

However, he warned that today, Nigeria’s path has been beset by conflict; religious and ethnic, economic challenges, insurgencies and banditry, much darkness, many valleys, and many thorns.

Osinbajo added that the vision of the founding father’s was not destroyed because of the many trials and tribulations; neither was the vision denied by the days when the fig tree did not blossom, or when there was no fruit on the vines.

“Our current trials cannot draw the curtains on our story, because the vision is for an appointed time,’’ he said.

The Federal Government alerted the general public to heightened security activities ahead of preparations to mark Nigeria’s 61st independence anniversary in a couple of days.

ZONING AGREEMENT ON ELECTIVE OFFICES SHOULD BE HONOURED – FASHOLA

INSECTICIDE COVER FORCED OUT OF VAGINA OF NIGERIAN LADY WHO WAS...