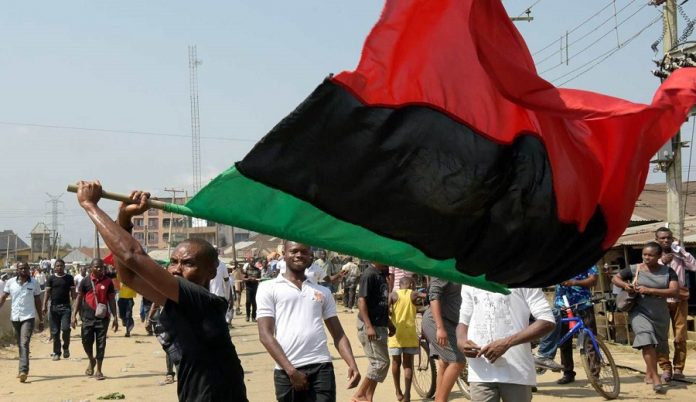 The separatist group, the Indigenous People of Biafra (IPOB), has threatened to declare a one-month sit-at-home protest in the eastern part of the country if its embattled leader, Nnamdi Kanu, is not brought to court on October 21.

The reaction from IPOB follows information received by the group about an alleged plot by the Department of State Service (DSS) not to produce Kanu in court on October 21 as part of the ploy to continue to incarcerate him.

The disclosure is contained in a statement issued by the Media and Publicity Secretary of the secessionist group, Emma Powerful, on Wednesday in Awka, Anambra State, and made available to the press.

He claimed that the federal government’s plot is part of an effort to demoralize Nnamdi Kanu and frustrate the Biafran agitation.

The statement from IPOB reads, “The attention of the Indigenous People of Biafra has been drawn to the plot by Nigeria government and her DSS in Abuja not to produce our leader Mazi Nnamdi Kanu to court on 21st October 2021, the date he is due to appear in court to start his case.

“The Federal Government of Nigeria has again perfected plans not to bring him to court on that day. Their wicked plan is to perpetually keep him behind bars without trial to see if they can demoralise him and Biafrans but they are late.

“If the Federal Government refuses to bring him to court in his next court appearance on October 21, 2021, the entire Biafra land will be on total lockdown for one month.

“The Federal Government will know that they cannot take us for granted anymore. Our peaceful disposition as a people should not be misconstrued as weakness.

“Nigeria cannot incarcerate our leader illegally and expect things to be normal again. If by October 21, Kanu is not brought to court, Nigeria will know that Kanu commands the unflinching loyalty of over 60 million Biafrans home and in Diaspora.

“By keeping our Leader out of circulation, his health will be in jeopardy and we won’t allow this. The Fulani-controlled Nigeria Government must tell us why it will choose to disobey court orders and expect citizens to watch like conquered slaves.

“They are busy granting amnesty to terrorists and bandits killing their soldiers and citizens but keeping peaceful agitators in perpetual detention. Their plan is to suppress agitation and force everyone into submission but Biafrans won’t succumb to their intimidation. We are different people.

“Their plan is to silence agitations for freedom as championed by Nnamdi Kanu and Sunday Ighoho so that the Fulani from across Africa will overrun Nigeria. They can’t conquer Biafra land as they have conquered Hausa and other indigenous tribes in Nigeria.”

This new threat by IPOB is coming a few days after they announced the end of its weekly sit-at-home protest amid criticism of its adverse effect on the region.

The Spokesman of the group, Emma Powerful said its struggle may have been infiltrated by miscreants, who have been violently enforcing its protest.

He warned that anybody caught intimidating the people to obey the purported non-existent sit-at-home order would be treated as a traitor-cum-enemy of the people and must be dealt with.

Recall that on June 29, 2021, Nnamdi Kanu, was re-arraigned at an Abuja Federal High Court following his arrest and extradition by authorities in Kenya in collaboration with the Nigerian security agencies.