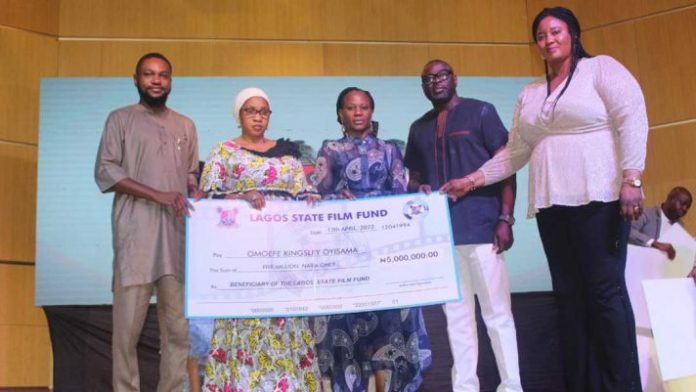 Governor of Lagos State, Babajide Sanwo-Olu has presented cheques worth N200 million to 37 filmmakers who are beneficiaries of the special interest-free loan to filmmakers under the State’s Creative Initiative (LACI), an initiative of the Ministry of Tourism, Arts and Culture.

The initiative which is aimed at addressing the financial challenges that inhibit quality film production in Lagos and Nigeria is believed to be the first by any state government.

Represented by the Commissioner for Tourism, Arts and Culture, Uzamat Akinbile-Yusuf qduring the presentation ceremony held at the Glover Memorial Hall, Lagos, Sanwo-Olu said the initiative and the presentation of cheques is a testament to the commitment of his administration to ensure the potentials of the entertainment industry are realized.

Speaking through Akinbile-Yusuf, Sanwo-Olu admonished the beneficiaries under the first batch of the revolving loan to make judicious use of the loan and pay it back at the stipulated time to enable others to be empowered also.

Earlier in an introductory address the Executive Secretary of the Lagos State Film and Video Censors Board (LSFVCB) Barrister Adebukola Agbaminoja noted that the agony of limited funding channels, has hitherto obstructed the full potentials of the industry.

The Executive Secretary who observed that over eighty percent of the films produced in Nigeria are produced in Lagos State, noted that it is in consideration of film value chain in Lagos State in particular, and Nigeria in general, that the Governor of Lagos State, magnanimously promised to help the industry overturn the funding hurdles by providing ‘interest-free’ loans through the Lagos Film Fund.

According to the Agbaminoja ‘’the Lagos State Film Fund, as conceptualized by Mr. Governor, is birthed to create stress-free funding stream for the industry and equally motivate private organizations to foster several of such funding streams for the full actualization of the value chain of the Nigeria Film Industry.

Today, as Mr. Governor presents cheques to the first batch of the film fund beneficiaries, we are proud to say, this is yet another promise kept’’. One of the beneficiaries of the fund and notable Nollywood veteran actor and producer Prince Jide Kosoko thanked the Lagos State government for instituting the fund.

Kosoko noted that the fund came at the right time. ‘’It will definitely supplement the movie project I am embarking on and it will in no small measure help my creativity to be able to meet up as originally planned’’ he said.