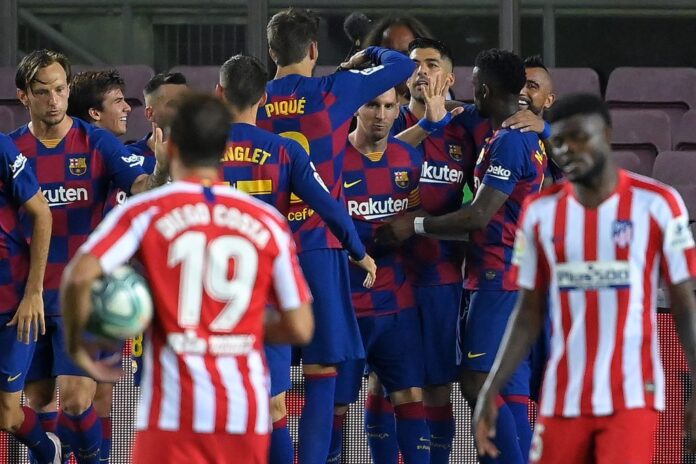 Barcelona’s Argentine forward Lionel Messi (C) celebrates with teammates after scoring a goal during the Spanish League football match between FC Barcelona and Club Atletico de Madrid at the Camp Nou stadium in Barcelona on June 30, 2020.

Atletico Madrid’s La Liga challenge will not succeed or fail on Saturday but end a decade-long drought by beating Barcelona and they could justifiably become favourites for the title.

A first league victory over Barca since 2010 would put Atletico nine points clear of their opponents and extend an impressive unbeaten run in the league to 24 matches.

They have played seven games so far this season, scoring 17 goals while conceding only two.

A convincing start, spearheaded by a flourishing Joao Felix and the invigorated Luis Suarez, has generated optimism but a real sense of opportunity has sprouted from the imperfections of their rivals.

Real Madrid have already lost twice, with Zinedine Zidane under pressure and all the guile and resilience that won them the title in July seemingly now absent four months later.

Barcelona are trying to begin again under Ronald Koeman but the teething problems that have them sitting eighth ahead of the trip to the Wanda Metropolitano are unlikely to be resolved soon, particularly with the upheaval of presidential elections to come in January.

Two teams at what feels like the end of two hugely successful cycles has created an opening for Atletico, whose own transition should be further along after their new crop proved raw last season but looks readier to capitalise this term.

The most obvious example of maturity is Felix, the 21-year-old who struggled to live up to expectations in his first year but has arguably been La Liga’s most influential player at this early stage of his second.

It is a great pity that Suarez, infected by coronavirus, will not face Barcelona, the club that so clumsily cast him aside in the summer.

But if Atletico are to win the title this season, it is likely to be with Felix as the driving force.

The Portuguese has already equalled the nine goals and assists he managed last season, with his instinctive, creative talents helping to unlock Atletico’s previously stodgy attack.

“He’s always had great moments for us but what he has now is consistency,” said coach Diego Simeone last month. “It’s a big year for him and hopefully he’ll keep getting better.”

Felix’s next challenge is to define games like this one and to give Simeone’s side even just a taste of the lethal touch in this fixture that Lionel Messi has given Barcelona.

Simeone was left applauding when Messi’s superb strike into the corner decided the contest at the Wanda Metropolitano last year, his 31st goal in 40 games against Atletico.

Messi is the thorn in Simeone’s side but the 33-year-old has not been his scintillating self in recent weeks, still weighed down perhaps by his blocked attempt to leave last summer.

There could be a lack of freshness in his legs too this weekend, given the Argentinian only finished playing 90 minutes against Peru in the early hours of Wednesday morning.

Barca will also be missing Ansu Fati and Sergio Busquets, both of them injured.

Even without Suarez, Atletico may feel then like the time is now to overcome their Catalan jinx, with the reward in the table potentially significant if a depleted Real Madrid also stumble away at Villarreal a few hours earlier.

Madrid’s defensive problems will not be helped by injuries to Sergio Ramos and Raphael Varane while Villarreal are flying high in second, following four victories on the bounce.

But the benefits to Atletico in terms of belief could be even more valuable than places jumped or gaps extended, with major rivals vulnerable and a league title there for taking. 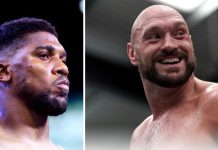 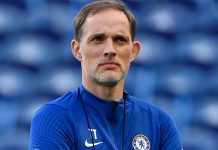 REASON WHY CHELSEA BOARD DECIDED TO SACK TUCHEL 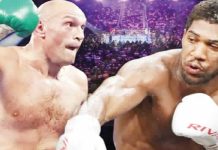 JOSHUA TO GET 40% FROM FURY CLASH