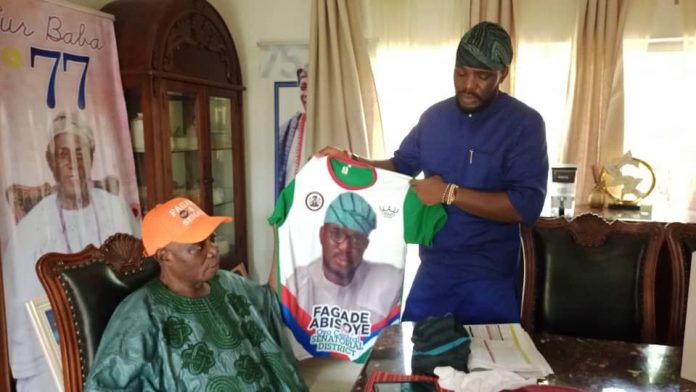 It is no longer news that popular and well loved youthful politician, Abisoye Fagade, has thrown his hart into the ring to vie for Oyo Central senatorial district seat, at the upper chambers of the National Assembly, senate, but what is of interest is that his aspiration continues to gather momentum even as the primaries of his party, the All Progressives Congress, APC, is merely days off.

The ambition of founder of Oyo Si Maa Dun, OSMD, Fagade, JustNews can inform just got a major boost as Oyo state political heavy weight who doubles as a former governor of the state, Chief Rasheed Adewolu Ladoja, just endorsed his ambition.

During a visit of consultation to the Ibadan High chief at his palatial home by Fagade,  Chief Ladoja joined the long list of supporters of Bisoye’s ambition by endorsing his aspiration to vie for the slot of Oyo Central senatorial district seat at the National Assembly.

DISPATCH RIDER CAUGHT WITH BABY INSIDE HIS COURIER BOX IN LAGOS