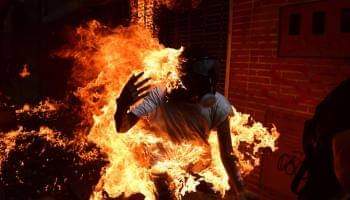 Barely two weeks after a lady sets her lover and his girlfriend ablaze in FESTAC, Lagos State, another lady, now at large, has reportedly set her lover ablaze at his Shaahu road residence in Gboko Local Government Area of Benue State over his alleged refusal to marry her.

Reports gathered from an eyewitness that the lady set the house on fire at about 1:30 am on Monday after her lover simply identified as Jude, his mother and a little boy had gone to bed.

According to the witness, the occupants of the house were however lucky as none of them lost their lives in the inferno “though her lover was badly burnt his mother and the child suffered minor burns and they are now receiving treatment in a Gboko hospital.

“We learnt that Jude had refused to continue his marriage plans with the young woman following her bad attitude towards his mother and on that basis, they were also quarrelling and the man ordered the lady out of his house.

“At the early hours of Monday at about 1:30 am she allegedly came with some people, poured fueled in and around the house, set it ablaze and fled but for the quick intervention of neighbours who rescued the occupants.”

Anene said the police received a report that a girlfriend set her boyfriend and his home on fire after pouring fuel around the building.

She said no arrest had been made as the girlfriend who was suspected to have committed the act was at large.

BREAKING: SANNI-BELLO TO TAKE OVER FROM BUNI AS APC CARETAKER CHAIR