The Federal Road Safety Corps, Lagos State Sector Command, has said it is working with the police and the military to tackle robbers on the Long Bridge, Lagos-Ibadan Expressway.

The News Agency of Nigeria reports that robbers cash in on the gridlock between the Long Bridge and Berger Bus Stop on the expressway to dispossess motorists and commuters of their valuables.

The section is currently undergoing reconstruction by the Federal Government, hence the partial closure which causes gridlock on the ever-busy highway.

The FRSC Sector Commander, Mr Hyginus Omeje, told NAN on Monday in Lagos that the corps was aware of robbery attacks against motorists on the Long Bridge and had risen to the occasion.

According to him, since the FRSC personnel do not carry arms, the corps is working with relevant agencies to clamp down on the miscreants who capitalise on the gridlock to rob people.

“Whatever we need to do to reduce gridlock across the state, we have to do it. It is because of this gridlock that miscreants attack people in traffic.

“Some of these armed miscreants dispossess people of their jewellery, phones and other valuables.

“We are aware of that and we are working with relevant sister agencies, the Nigeria Police Force and even the military, so that they can continue to provide security there since the FRSC does not carry arms,’’ Omeje said.

According to him, the corps only has pen and paper to work with.

“Ours is to ensure that the gridlock that the criminals are capitalising on is removed from the road. If the traffic is flowing, nobody will come and attack anyone.

“By the time this Lagos-Ibadan Expressway is completed and we open up six lanes, anyone that stays on the way is risking his life,’’ the FRSC boss said. 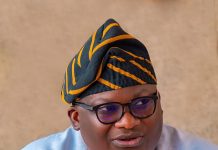