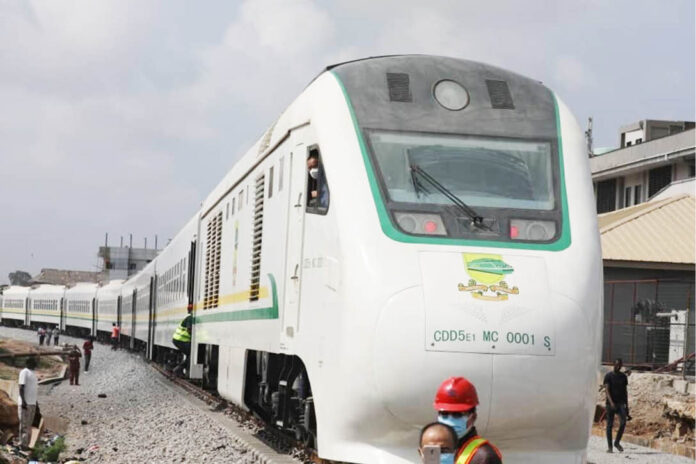 The much anticipated Lagos-Ibadan standard gauge train kicked off on Monday amidst low turn of passengers. Many people who spoke to reporter complained that the services are too expensive for the poor to afford, among other issues. However, the Nigerian Railway Corporation (NRC) and some stakeholders are optimistic that the situation would improve in the coming days.

The commencement of commercial operations on the 157-km Lagos-Ibadan fast train has further boosted the railway modernisation initiative of the Federal Government, aimed at delivering modern train services to the people and connecting cities and communities, thereby improving the socio-economic standing of those communities.

It was on this premise that many people expressed delight with the takeoff of the Lagos-Ibadan train, exactly two years and eight months after the groundbreaking of the project was conducted by Vice President Yemi Osinbajo, who was the then acting president.

Prior to the commencement of commercial operations, the Federal Government had earlier conducted a trial run, where passengers were conveyed for free for almost four months before it was suspended with the outbreak of the COVID-19 pandemic.

However, with the completion of the track laying to Ebute-Meta, the final destination of the project, from Ibadan, passengers can now enjoy a ride in a modern diesel multiple unit (DMU) coach deployed for the service, with different fare categories, comprising economy, business class and the first class.

According to the rate approved by the Federal Government, the fare ranges from N2,500 to 6,000. For now, the train starts from Ibadan, stops at Abeokuta before heading to Lagos.

It leaves Ibadan by 9: 00am and returns by 4pm, making it possible for people to come to Lagos via train in the morning and return in the evening.

But since the service commenced on Monday with four trips, both inbound and outbound made, few passengers have turned up for the service.

Report indicated that while one passenger bought ticket from Ibadan to Lagos on the day the service was flagged off, there has been some improvement gradually with passenger turnout.

It was gathered that the train arrived Lagos on Thursday with 18 passengers. So far, the number of passengers conveyed since the commencement of service is less than the total number of those on one train movement.

But an official of the NRC who spoke with reporter said, “The passenger turnout is increasing by the day. For instance, we had 18 people yesterday (Thursday) from Ibadan, and I believe that more people are turning up. This apathy is expected at the beginning. This was the case when the Abuja-Kaduna train started. But we are increasing by the day.

“Again, people are not really travelling like that. Even if you go to the motor parks you would see that transport operators are also complaining,” he said.

Another factor contributing to the low load factor, according to the official, is the ongoing work on other stations within the corridor, as there are no fewer than nine stations from Lagos to Ibadan, while the train stops in only three.

“People find it difficult coming to the main station.  By the time other stations that are relatively close to them are open, you can be sure that we would have many passengers turning up,” the official added.

Report indicated that some people are complaining about the fare, which they said was somehow expensive when compared to the cost of going by road. For instance, Lagos to Ibadan by road is about N1,500 in a commercial bus, while it could be as cheap as N800 outside the park.

In Abeokuta, Ogun State, residents told our correspondent that the fare “is too expensive for the common man,” hence, the snub by passengers.

“It’s very possible that people snub the rail because of the fare. How can I travel from Ibadan to Lagos at N3,000? It does not make any sense,” Adeola Adegbenro, the secretary of Lupele, one of the communities along the railway line, told our correspondent.

He said that not many activities were taking place at the railway station in Abeokuta. “There are no activities around here at all. Even if it is a direct Lagos- Ibadan trip, we should at least hear the noise of the train passing by,” he said.

Adegbenro urged the NRC to consider a review of the fares, saying the train transportation should lessen the burden on the low cadre of the society.

“I believe the train transportation is for the low cadre of the society. Even if you are going to have first class and second class in the train, the major reason for establishing a train should be to assist transportation of those who are of the low cadre. The fare is too high,’’ he added.

Another resident, Abiodun Mubashiru, called for a downward review of the fares, saying with the high fares, it “is very possible that passengers would not patronise the train.’’

Some travellers in Ibadan also said the distances between their residences were far from the two terminals of the train stations.

Some insisted that the N2,500 charge for the Lagos-Ibadan fare was too outrageous, while others, however, said the money was not much, but the stress involved was not necessary.

A reporter who went round some major motor parks at Iwo road, Sango, Challenge and Ojoo in Ibadan observed that though commuters were not comfortable with the services of some of the transporters, the charges of the train were considered to be too prohibitive.

Another commuter at Sango bus stop, Kemi Olatunbosun, said as a student she had done necessary calculations before going for a private commercial vehicle.

She said, “The government didn’t consider some of us who are students before arriving at that fare. For instance, I calculated my movement before travelling.

Whenever I am left with N1,500, I think of going to Lagos. I am a student of The Polytechnic, Ibadan and I know it is not easy. Let us continue taking this bus until our plight is factored into Nigeria’s economy.’’

Another traveller and civil servant in Ibadan, James Oduntan, noted that the N2,500 for train from Ibadan to Lagos was not too much. He was, however, optimistic that with time, Nigerians would adapt to the system.

“I think it is new to us. With time, many of us would prefer to take train because of the safety and time involved. As we are going by road now, we cannot determine when we will get home, unlike train, which we know cannot take more than 1hour. I think we are going to get used to it,’’ he said.

To Tolani Adeola, the distance from town to her house cannot allow her to go for train whenever she is travelling. “Why Moniya? Why Omi-adio? I think Dugbe would have been better. I cannot leave my house in Bodija to any of the terminals,’’ she said.

Most of respondents, however, noted that train is faster and safer when compared to travelling by road.

More so, with the construction work ongoing on the Lagos-Ibadan expressway, passengers have expressed frustration travelling on the road, but they said the train service, which would have been a veritable alternative, is still on the high side. A downward review, no doubt, would make the difference, they said.

According to Adedamola Falade-Fatila, a former chairman of the Nigerian Society of Engineers (NSE), Ibadan branch, the railway project is a laudable initiative.

He also said the Moniya terminal was too far from Ibadan town, adding, “We need a better logistics arrangement for passengers around that axis.’’

He, however, said the railway modernisation initiative of the government was a good step in the right direction as it would ease the burden on the roads.

From the engineering perspective, Falade-Fatila stressed the need to get more Nigerians involved in running the facilities.

“We need to get more Nigerians involved so that the embarrassing situation on the Abuja-Kaduna train recently when we had to wait for the Chinese to fix the train would not happen again,’’ he added.

ELEV8 INAUGURATES THE QATAR DIGITAL CENTER OF EXCELLENCE IN COLLABORATION WITH...

#BBNAIJA: JACKIE B AND JAYPAUL EVICTED FROM BIG BROTHER HOUSE