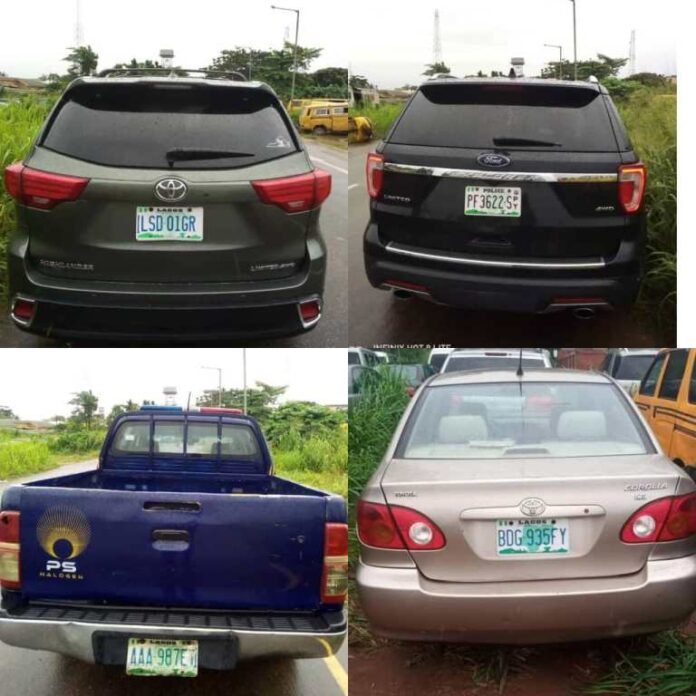 Ten vehicles have been impounded by the Lagos State Environmental and Special Offences Unit, Taskforce for driving against traffic.

They were impounded on Muritala Mohammed International Airport Road in Lagos.

The agency vowed to forthwith commence the arrest and prosecution of drivers of vehicles impounded for plying one way in addition to the forfeiture of such vehicles.

Its Chairman, Chief Superintendent of Police Shola Jejeloye, led his team on a routine enforcement of traffic law in the metropolis when he ran into some of the vehicles driving against traffic on Airport Road on Friday night.

These led the team to the seizure of more vehicles bringing the total to ten.

He expressed surprise about the unending attitude of some motorists still driving against the traffic in view of the impound and auction policy of government.

Jejeloye noted that, “forthwith, Taskforce would start prosecuting drivers of vehicles impounded for one way”.

He maintained that it is appalling that despite the seizure of vehicles and auctioning them after obtaining court order, a lot of motorists still drive against traffic.

According to him, the agency would implement the Traffic Law on driving against the traffic completely.

Jejeloye noted that it has become necessary to forthwith begin the arrest and prosecution of drivers of vehicles impounded for driving against traffic because of the unyielding stance of many motorists still caught in the act.

He added that Lagos State Law provided for a year imprisonment for driver of vehicle impounded for one way as well as forfeiture of such vehicle.

“It is disturbing that you still find many highly enlightened motorists driving against traffic just like the uneducated ones.

In view of the fact that a lot of lives have been cut short by vehicles driving against traffic, many motorists are still in the habit of driving against the traffic, putting pedestrains and other road users lives in danger”, he stated.

He noted that the agency would step up efforts to ensure that perpetrators are made to face justice, adding that, no one would be spared in enforcing the law forthwith.

It would be recalled that Lagos State Traffic Law stipulates forfeiture of vehicle for driving against traffic along with a year imprisonment for a first offender; three years imprisonment and forfeiture of the vehicle to the State and capturing of data and biometrics for 2nd and subsequent offence.

This is contained in a statement by Head, Public Affairs
Lagos State Environmental and Special Offences Unit (Taskforce), Femi Moliki.

SUJIMOTO’S SEARCH FOR A BEFITTING DOOR FOR THE LUCREZIABYSUJIMOTO APARTMENT –...

FLOURISH AFRICA TO EMPOWER 500 FEMALE ENTREPRENEURS WITH N1BN IN FIVE...