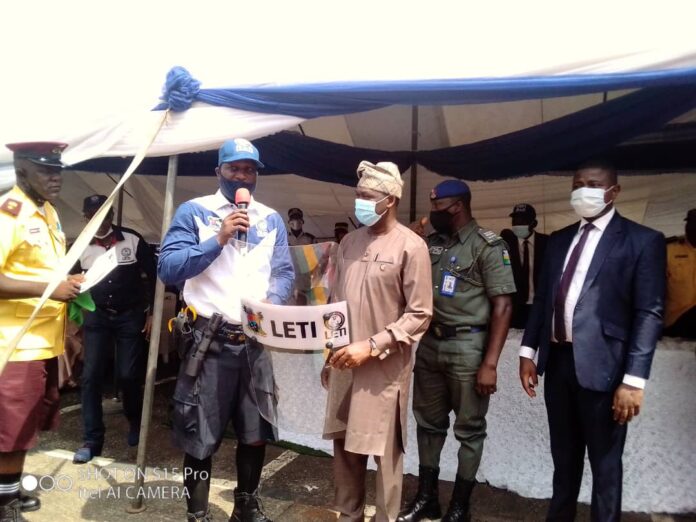 • As 6329 Lagos Law Officers pass out of LETI
The Head of Lagos State Enforcement Training Institute (LETI), Prince Ifalade Ajasa Oyekan has established that law enforcement officers in Nigeria and Lagos in particular deserve the respect of the citizenry.

He made this known at the passing out parade of 6, 329 officers of Lagos state-owned law enforcement agencies comprising Kick against Indiscipline (KAI), Lagos State Traffic Management Authority (LASTMA), Lagos Neighborhood Safety Corps (LNSC) and Vehicle Inspection Service (VIS) that were trained by the institute in 2020.

The passing out parade which was chaired by the Lagos State Governor, Babajide Olusola Sanwo-olu represented by the Deputy Governor, Kadri Obafemi Hamzat saw a simulated display of how security personnel can manage crime scenes and protest grounds without unnecessary use of force.

The Agility Centre, a centre where law officers can engage in physical exercise and karate, was also launched while modern technological tools such as Body Worn Cameras (BWC) and Body Shields were deployed.

Speaking at the event, the Governor noted that the Law Enforcement Training Institute (LETI) was established so that security personnel can acquire requisite expertise needed to sustain peace and order in the state using state-of-the-art equipment and cutting-edge knowledge.

‘Our administration recognises the need for an effective security system as sine-qua-non to a peaceful and prosperous society. This is why Security and Governance represents a key pillar in our administration’s T.H.E.M.E.S agenda.

It goes without saying that effective security and safety of lives and property can only be achieved with a qualitative blend of men and materials’.

That is why I ask ‘what is the respect been accorded to us’ in this part of the world, law officers deserve your respect.’

He then pleaded with the government to support the efforts of the institute, ‘Our budget have been slashed again they want us to train one-quarter of what we trained before.

We need more gadgets to be a 21st-century law enforcement officer as it is obtained all over the world.’

It should be noted that all the 6329 officers were not physically present at the passing-out parade in line with the social distancing protocol. Only a segment of the officers were at the ceremony with the General Managers of each agency also present.