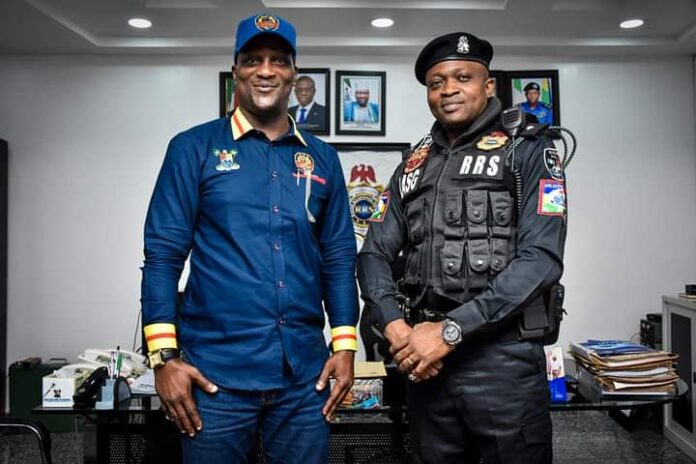 The General Manager of the Lagos State Neighbourhood Safety Agency (LNSA), Prince Ifalade Oyekan, has paid a courtesy visit to the Lagos State Rapid Response Squad (RRS), just as he solicited for the collaboration of the Agency to ensure the safety of lives and property in the State.

Speaking during the visit to the office of the RRS Commander, CSP Olayinka Egbeyemi, in Alausa, Ikeja on Thursday, Prince Oyekan said the management of the LNSA deemed it necessary to collaborate with other security outfits in the State, particularly the RRS, towards achieving its set goals and objectives.

He emphasised the need for concerted efforts among all the security agencies in the State, promising to do all that is necessary to ensure that the relationship between the two agencies grows beyond mere discussions and rhetorics to an enduring one that will benefit residents of Lagos.

While expressing his happiness on the positive response by the RRS Commander on his request for partnership, Oyekan warned criminals to stay off Lagos as the city will soon be too hot for all crimes and violations with the collaboration of the two foremost community policing agencies.

In his response, the RRS Commander, CSP Olayinka Egbeyemi, thanked the General Manager and his team for the visit, informing that the squad is ready to partner all security outfits towards ensuring effective community policing across the nooks and crannies of Lagos metropolis.

He said, “We can’t afford to let Lagos down. We owe the people and the Government the responsibility of ensuring the safety and security of all residents”.

NIGERIA VS SUDAN LIVE ON STARTIMES AS NIGERIANS CONFIDENT OF EAGLES...

CEMENT CHEAPER IN NIGERIA THAN GHANA, ZAMBIA, OTHERS ― DANGOTE CEMENT