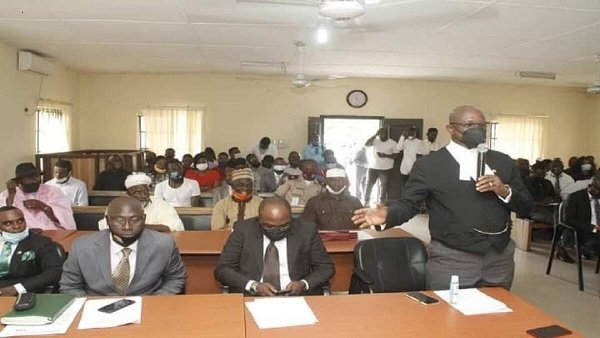 One Mr Samuel Anselem has asked the police to pay him N500m as compensation for the death of his brother.

Anselem alleged that the deceased was arrested by the defunct Special Anti-Robbery Squad (SARS) in December 2010 and has not been seen since then.

He lamented that his parents died of a heart attack resulting from the disappearance of his brother, who is believed to have been killed by the SARS.

Samuel in a petition marked JPPB/MEMO/049 on Wednesday told the Judicial Panel of Investigation on Incidences of Police Brutality sitting at High Court complex in Uyo, Akwa Ibom state, that his brother, Mr Ifiok Anselem Samuel was last seen on the day of arrest which is 10 years ago.

Samuel, who said that he was the only brother to the ‘decease’, stressed that their parents died as a result of the heartbreak received from the traumatic experience.

“Mr. Ifiok Anselem Samuel was arrested by men of the disbanded Special Anti-Robbery Squad of the Nigeria Police from the Akwa Ibom State Command headquarters on the 14th of December, 2010.

“He was last seen heading into a Nigeria Police branded Hilux van that same day with other persons and has not been seen or heard from till date, despite petitions and court orders for his production dead or alive.

According to the petitioner, for instance, the Police to date has refused to honour the order of Hon. Justice Isangedighe gave the Akwa Ibom State Commissioner of Police for the production of his brother in court and the subsequent release from their custody.

Samuel said if police cannot produce or give an explanation to the whereabouts of his brother, they should be held accountable and five hundred million naira worth of damages be paid for brutally infringing on the fundamental rights of his brother.