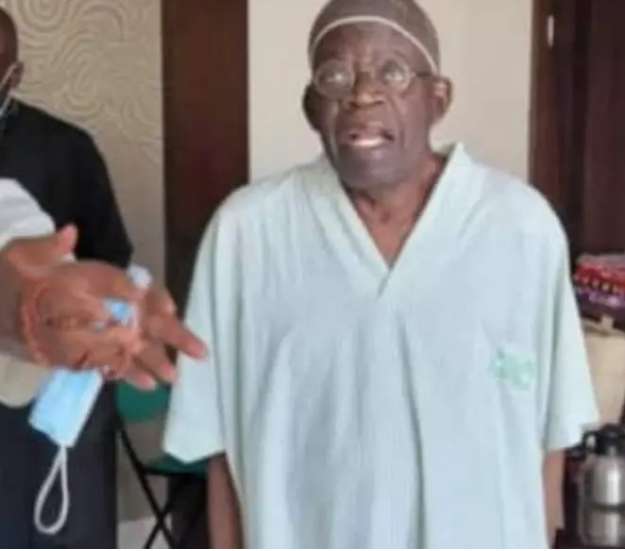 Mixed reactions have been trailing the All Progressives Congress, APC, National Leader, Bola Ahmed Tinubu, recent photos which surfaced on the internet.

Although the renowned politician has not publicly declare his intention to run for president in 2023, however, there are strong indications that the APC leader may vie for the presidency.

However, even though the APC stalwart has political experience to pilot the affairs of the country, many Nigerians have expressed reservations about the age of the popular politician and physical strength to coordinate the activities of the country if he eventually win the presidency seat.

Similarly, diverse controversies also trailed the official age of the APC National Leader, who celebrated his 69th birthday in March.

Many had revealed that the age of Tinubu was edited multiple times on Wikipedia from 79 years old to 69 years old, raising concerns about his official age.

To this end, many Nigerians have continued to express divergent views on whether Tinubu is will be a good candidate for 2023 presidency, following his recent pictures that surfaced on the internet.

The pictures which was purportedly taken during the last Eid Mubarak celebration, raised questions among some Nigerians.

While some said that the elder statesman should give room for youths to run for presidency, others argued that competence and experience matters most above age when it comes to deciding who should be voted in the forthcoming general election.

But in your view, do you agree that competency should be the only yardstick for voting candidates to public office instead of age.

Do you think Asiwaju Bola Ahmed Tinubu (Jagaban) is lying about his age just to appear for for Presidency in 2023.