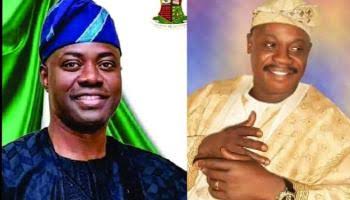 It will definitely going to be a battle of the titans as former Deputy Governor of Oyo State and chieftain of the Peoples Democratic Party (PDP), Barr. Gbolarumi Hazeem has formally declared his 2023 gubernatorial ambition to slug it out with Seyi Makinde.

Hazeem who was a Deputy Governor to the late Christopher Alao Akala has insisted that a 4-year tenure of Engineer Seyi Makinde as governor of Oyo state would soon be over.

The former Deputy governor stated that he would bring his wealth of experience to bear in repositioning the state and make it ranks among the best among the comity of state.

He blamed the rancour and disunity among founding fathers of the PDP in the state on the style of governance adopted by Governor Makinde, adding that, if he eventually emerges as the flagbearer of the party all this would become a thing of the past.

Findings reveal that some chieftains of the party are plotting to thwart the efforts of Makinde’s second term bid in office.

He was alleged to have breached an agreement reached with members of the various group of the coalitions that aided his victory in 2019.