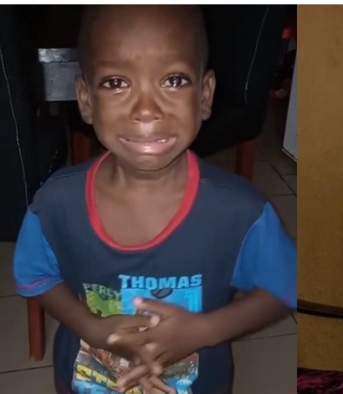 Sometime in 2020 during the lockdown, Oreofeoluwa had offended his mum, and the woman was ready to punish him but the little boy begged his mummy to calm down.

It was a very funny conversation between him and his upset mom who was ready to beat him considering she had warned him so many times but Ore was not having it as he kept trying to negotiate his ways out of punishment.

Once the video hit the internet, it garnered more reaction than his parents imagined it would as he was also recognised by Sanwo-Olu who said;
“I saw a video of a charming young boy online asking his mom to ‘calm down’ as she was set to punish him for a misdemeanour.

I was moved by his sobriety, which reflected in his promise of “last chance”, when confronted with the fact that he is a regular offender.”

Recently, popular Nollywood producer, Kunle Afolayan met with the young boy, Oreofeoluwa and gave him his first movie role in his movie.
In the movie, it was evident that the young boy is a born actor as he played his role with ease.

GOVERNMENT’S SUSPENSION OF NEW ELECTRICITY TARIFF IS ONLY A TEMPORARY RELIEF,...