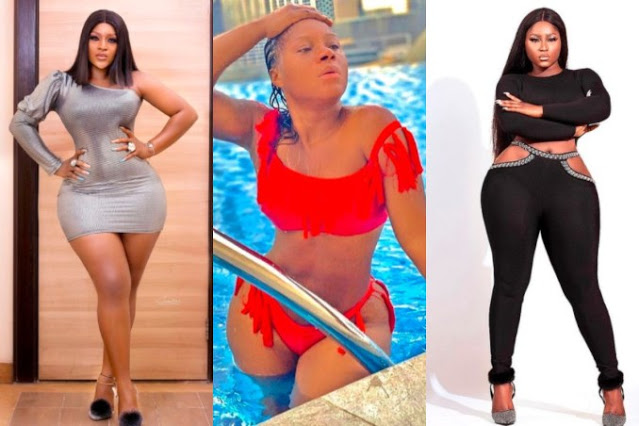 Nollywood Actress, Destiny Etiko, has taken to her social media page to plead with her future husband to be calm and don’t panic, as she is not a bad person.

The actress, who is well known for her curves, also stated the roles she plays in movies as she portrays that she is a soft person. She added, “I am not a tough person. I am actually very soft.

WHILE SHARING HER EXPERIENCE AS SHE CARRIED A PYTHON IN A MOVIE DESTINY ETIKO SAYS, “THE MOVIE, ‘IDEMILI’, GAVE ME ‘LIFE’.

WHEN I GOT THE ROLE, I WAS TOLD THAT I WOULD BE CARRYING A SNAKE. MY MOTHER ACTUALLY ENCOURAGED ME TO TAKE THE ROLE. SHE SAID THE SNAKE WOULD NOT HARM ME. I THEN WENT AHEAD TO CARRY THE SNAKE. I WAS NEITHER THE LEAD NOR SUB-LEAD CHARACTER IN THE MOVIE THOUGH.

I ONLY HAD 10 SCENES IN THE MOVIE BUT THEY WERE VERY SIGNIFICANT. IT IS ONE MOVIE I CANNOT FORGET IN A HURRY. THE SNAKE WE USED WAS A PYTHON AND THE GOOD THING IS THAT IT IS NOT POISONOUS, SO IT WAS NOT SO DIFFICULT FOR ME. BUT, I WAS NOT THE ONLY ONE THAT CARRIED THE SNAKE IN THE MOVIE.

MY SENIOR COLLEAGUE, EVE ESIN, ALSO CARRIED A SNAKE. I ALMOST WET MY PANTS WHEN IT WAS DROPPED ON MY NECK BECAUSE IT WAS SO COLD. WHEN WE CAME BACK ON SET THE NEXT DAY, THEY PUT TWO SNAKES ON ME. AND, THE FUNNY THING IS THAT THE SNAKES SLEPT OFF ON MY BODY. IT WAS QUITE A MEMORABLE EXPERIENCE.”

Etiko also stated that her kissing scenes in movies were mostly real. She said, “Most of the kisses I give in my movies are real though. If one wants to do it well, one has to make it real.”

SANWO-OLU CHARGES SUPER EAGLES TO BE WIN AGAINST BENIN, LESOTHO

BUILDING COLLAPSED IN LAGOS ISLAND- ONE DIES, OTHERS RESCUED

“I MIGHT NOT (ALLOW MY SON TO REPRESENT NIGERIA) ...