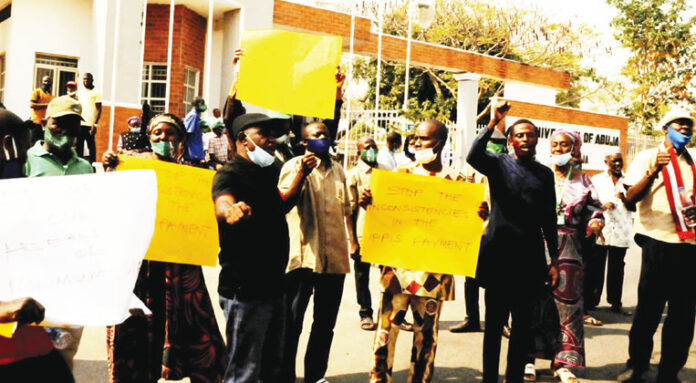 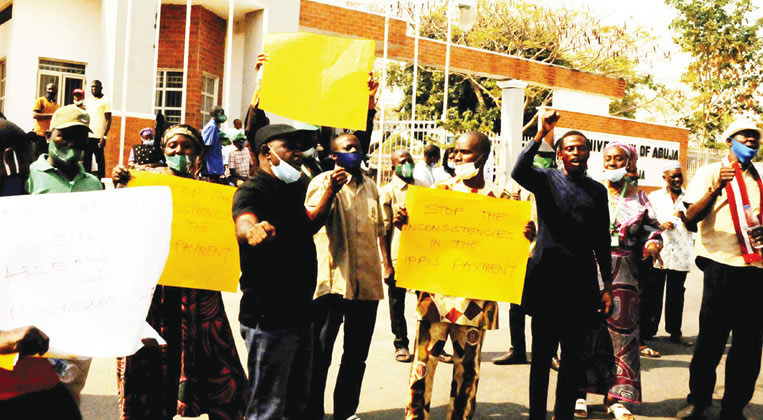 Members of the Non-Academic Staff Union and Senior Staff Association of Nigerian Universities protesting the non-payment of minimum wage, welfare arrears, IPPIS and sharing formula of the N40bn Earned Allowance in Abuja on Tuesday.

Non-academic unions in universities and the Academic Staff  Union of Universities on Tuesday differed on the Federal Government’s N40bn earned allowance for the institutions’ workers.

While ASUU President, Prof Biodun Ogunyemi,  in an interview, justified the amount promised lecturers out of the N40bn, non-academic unions described the Federal Government’s sharing formula as illogical and a divide and rule tactic.

The unions spoke as protests by non-academic staff over the  Integrated Personnel and Payroll Information System and the N40bn earned allowance rocked university towns across the country on Tuesday.

The Federal Government had,  on December 22, as part of agreements reached with ASUU,    promised to release N40bn earned allowance to universities. The academic union had on December 24 suspended a strike, which it started on March 23.

But the non-academic unions, which kicked against the N30bn promised ASUU, said the sharing formula was 75 per cent (N30bn) for the lecturers and 25 per cent for other unions.

The General Secretary of the Non-Academic Staff Union of Educational and Associated Institutions, Mr Adeyemi Peters, in an interview on Tuesday,  said the failure of the government to implement the recommendations of the forensic audit report on the earned allowance was the cause of the current crisis over the sharing formula.

Peters said the award of 75 per cent of the fund to ASUU was not based on any logic, noting that it would also breed corruption.

He explained that the audit report of consultants engaged by the Office of the Accountant-General of the Federation recommended the amount each university would earn as well the total amount that should be paid to the unions.

Peters said, “Since 2013, the government has been releasing money, but these releases have been done in a manner that ASUU gets a bigger chunk of what is released. So, the non-teaching staff said the government should conduct a forensic audit of what had been paid so far.

“It was agreed to by all the unions; and the Office of the Accountant-General of the Federation hired some consultants that carried out the forensic audit of what had been released, what had been paid and what was remaining.

“And what we said was that if the forensic report is out, the distribution of the money (N40billion) should be based on the outcome of the forensic report, which probably would have shown how much each staff member has received, and the outstanding and you can use that to determine scientifically the quantum of what each of the union gets, but the government abandoned the report and decided to now say the N40b should be shared 75 per cent to ASUU and 25 per cent to other unions.”

“We said no, that would contradict the idea of the forensic audit. What they are proposing is not based on any logic and it doesn’t portray transparency. That is why we are insisting on the use of the audit report to determine what would be paid to every staff member and what each union would get.”

The NASU secretary said his union did not have any issue with ASUU, but with government which he accused of awarding the sharing percentage randomly.

Also, the President of the National Association of Academic Technologists, Mr Ibeji Nwokoma, in an interview , accused the Federal Government of using divide and rule tactics to polarise the unions.

He stated that the decision to allocate N30b to ASUU was unfair and unacceptable, noting that the government had not disclosed the yardstick for the sharing formula.

Nwokoma stated, “We are not against the government giving any union what they think they should give, but the truth of the matter is that what is sauce for the goose is also sauce for the gander. Our earned allowance has been paid only up to 2011, whereas ASUU has been paid up to 2015 and if you give them N30b, you would now pay them to 2020. So, it is unfair, it is unjust and acceptable. Government is using divide and rule system.

Nwokoma said ASUU was probably being rewarded with the huge sum for going on strike, stressing that each of the unions could ground the university system. We have given the government 14-day ultimatum to review the sharing formula or we would shut down the universities.”

The President of the Senior Staff Association of Nigerian Universities, Mohammed Ibrahim, during the union’s protest at the University of Abuja on Tuesday, said, “If the government remains adamant and the issues are not addressed, JAC (the Joint Action Committee)  will take an action on Thursday.

“We also have our children in the universities.  We hope that government will do the needful before the end of the three-day protest, but if that is not done, which we are not praying for, by Thursday  we will be able to tell the whole world our next line of action.”

Also at UNIABUJA, the  Treasurer of NASU, Sadiat Hassan, in an interview with journalists, said,  “We are protesting against the irregularities in the  IPPIS payment and demanding the renegotiation of our 2009 agreement which has been long overdue.

“We are also protesting against the non-payment of our earned allowances and injustice that was done by the Federal Government in the distribution of the earned allowance because they gave a particular union 75 per cent and other unions 25 per cent.

“This is against the agreement reached in October (last year) that the money should be for all the unions. So, we expect them to do justice to everybody.”

Also, members of SSANU at the  Federal University Lokoja , Kogi State as early as 8am  on Tuesday embarked on a peaceful protest.

The Chairman of SSANU/JAC in the university, Uche Onyedi, threatened that the unions would begin a nationwide strike, if government failed to meet their demands.

Addressing journalists during a  protest at the Federal University, Gusau, Zamfara State, the Chairman of JAC of the university, Mallam Muddasir Musa, said, “We tried to meet with them (government) and solve the problems, but it never worked.

“ We have decided to protest and if it fails to work, we will have to embark on a strike because it is the only language government understands.”

IPPIS has impoverished us – Non-academic workers

At the Abubakar Tafawa Balewa University, Bauchi, JAC  lamented that joining the IPPIS introduced by the Federal Government had impoverished workers.

The JAC Chairman, Sulisma Jatau, who spoke to journalists at the commencement of the three-day protest by the unions, said the groups joined the IPPIS in error.

He stated, “The unions in the universities joined the IPPIS because we were deceived that it was a platform that would eradicate corruption and bring transparency.

“We even complained about some irregularities we had in some universities. We went there (Abuja) and rubbed minds and it took us almost six months to tell them that we had some peculiarities in some universities and the platform would not capture them.

“They promised us that that the platform would be flexible that it would encompass everything,  but to our dismay, when we joined, we became poorer than we were.

“Our salaries are being deducted unnecessarily.  In fact, for the past 11 months, we have been getting different salaries. So we discovered that for you to correct one anomaly, you have to go to Abuja. This is counterproductive. We now believe that the IPPIS is corrupt.”

He said that the union signed a memorandum of understanding with the Federal Government on the issue on  October 20, 2020,  but nothing had been done.

“We have to do this protest at this moment because of the announcement of resumption date of the universities. We have so many issues on ground and as law-abiding unions, we don’t want to disrupt the calendar of the schools.  That is why we want the government to be very proactive and come to our aid and meet our demands before schools resume.”

But the President of ASUU, Ogunyemi, in the interview, absolved the union of blame in the sharing formula crisis.

Ogunyemi maintained that his union had an understanding with the government and what ASUU would be paid had been spelt out.

We have an understanding with govt, others can ask for their rights too – ASUU

“I  don’t have business with any other union. Our concern is with ASUU members. I don’t have problem with any other unions because they too are asking for their rights. So, our rights should not stop their own and their own rights should not stop ours. Whatever they think they are qualified for we don’t have problem with that. We know what our members deserve and what has been established for our members we believe that government would pay.”

He also said ASUU was discussing with government on the payment of the earned allowance.

Recall that Ogunyemi, when he announced the suspension of the nine months strike which started on March 23, 2020 and ended on December 24, 2020, said that the Federal Government promised to pay the money before the end of  December 2020.

Ogunyemi on Tuesday said, “We are engaging government on that. There were some initial obstacles and we have surmounted that obstacle so we have some understanding.”

COVID-19: NAPST BEGS FG NOT TO CLOSE SCHOOLS BEYOND JAN 18