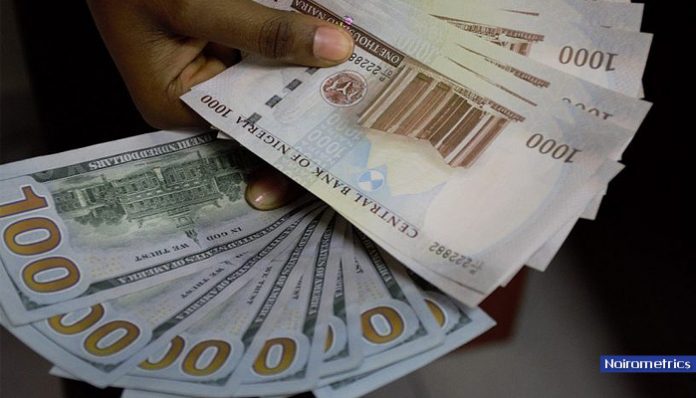 The exchange rate between the naira and the US dollar closed at N418.27/$1 at the official Investors and Exporters (I&E) window, falling by 0.12% from N418.25/$ recorded the previous day.

A sum of $115.78 million in FX value exchanged hands at the official market as liquidity tightened, falling by 50.64% compared to $234.54 million that was traded in the previous trading session.

Also, the exchange rate against the US dollar depreciated further on Thursday morning at the peer-to-peer market, trading at a minimum of N607.32/$1 compared to N602/$1 recorded as of the same time the previous day.

Meanwhile, the exchange rate at the parallel market remained stable at N590 to a dollar. This is according to information obtained from BDCs operating in Nigeria.

Nigeria’s external reserve depreciated by 0.1% on Tuesday, 10th May to stand at $39.12 billion, compared to $39.17 billion recorded as of the previous day.

The decline in the external reserve level can be attributed to the continuous intervention by the Central Bank in the FX market in order to ensure the stability of the local currency.

The opening indicative rate closed at N417.7/$1 on Wednesday 11th May 2022, the same as recorded in the previous session.

A total of $115.78 million was traded in FX at the official Investors and Exporters window on Wednesday.

The crypto market is experiencing large sell-offs as investors in the space are getting totally liquidated. The industry market capitalization shed over 11% on Wednesday and resumed trading activities on Thursday morning with an 8.8% fall to stand at $1.153 trillion.

The movement in the market is triggered by large sell-offs witnessed in the top 5 cryptocurrencies, Terra losing over 90% of its value on Wednesday, currently trading at a little over 24 cents.

Bitcoin on Wednesday lost 7.5%, while a further 7.22% drop in value ensured it trades below $27k as of press time.