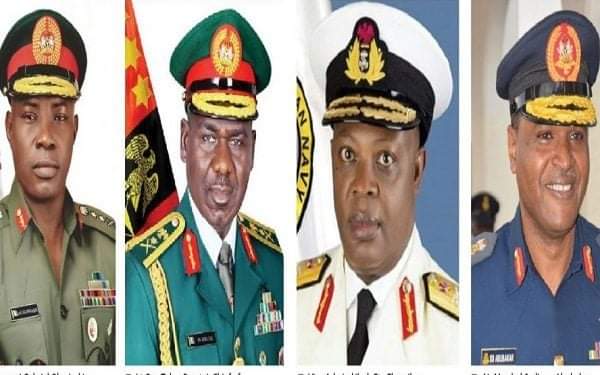 …task them on terrorism, restoration of peace, security

The National Association of Online Security News Publishers (NAOSNP) wishes to congratulate the newly appointed Service Chiefs and at the same time, bid the outgone Service Chiefs farewell for their various contributions to National Security.

Without doubt, the appointment of Major General Lucky Irabor as the New Chief of Defence Staff (CDS); Major General Ibrahim Attahiru as the Chief of Army Staff (COAS); Rear Admiral Awwal Zubairu Gambo as the Chief of Naval Staff (CNS) and Air Vice Marshal Isiaka Oladayo Amao as the Chief of Air Staff (CAS) came to Nigeria with so much enthusiasm considering that they were unrelenting on the Presidency to change the former chiefs and reinforce the campaign against insurgency.

The new men in the bloc have so much on their plate. It is expected that the fight against organised crimes would witness a multifaceted approach that will relegate criminals to the background and obliterate those that refused to repent and shun criminal acts.

As the expectations are growing coupled with the confidence reposed on the new military Commanders in all the various arms, their appointment will bring transcendental transformation leading to desirable result for every Nigerian, irrespective of political class; social persuasion and professional affiliations, while at the same time, enjoin Nigerians to support the military physically, morally and spiritually to succeed.

Interestingly, considering the pedigree of the new service chiefs, having been at the theatre of war at different times battling the insurgents, we are confident that they would bring a lot of tactics to bear at their various operational commands that would lead to the weeding off of terrorists, bandits, kidnappers, herdsmen and other organised crimes gaining sway in different parts of the country.

This is the time to deploy both material and human resources of the highest standard. It is time to acquire sophisticated weapons, boost troops’ morale, and engage the citizenry to be able to overrun every form of criminality.

We make a clarion call to the new Service Chiefs to distance themselves from politics in decision-making and be professional in deploying strategies that can swiftly deal with the buffoonery of Boko Haram terrorists, ISWAP, bandits and Kidnappers.

We believe in the new Commanders and their professional capacities to obliterate every element that has stood against the peaceful coexistence of Nigeria as a country.

As is often said: “Victory comes from the Almighty God,” we at NAOSNP believe that with dedication and strict observance of professional ethos, all forms of insecurity would be annihilated and peace will be restored.