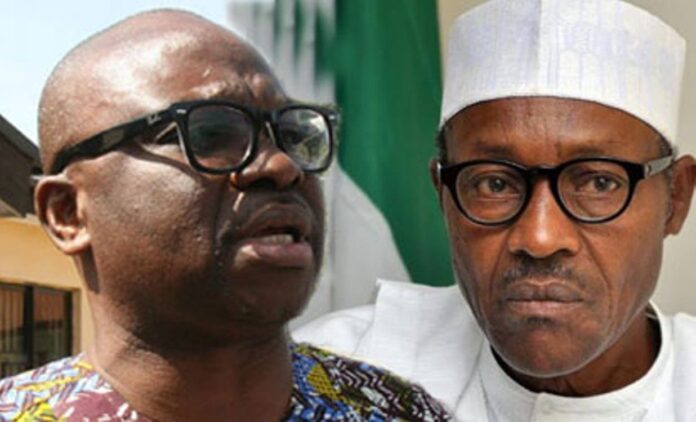 President Muhammadu Buhari has come under attack over failure to appear before the National Assembly.

Former governor of Ekiti state, Ayodele Peter Fayose, Thursday criticized him, noting that Buhari has validated his initially statement where he submitted that Mr President would not honor the invitation.

NASS had last week invited President Buhari for a chat on security issues bedeviling the growth of the country.

The Attorney General of the Federation and Minister of Justice, Abubakar Malami, yesterday quashed their invitation, noting that NASS lacks constitutional powers to invite Buhari.

Buhari however, did not honor the invitation as NASS members sat for Thursday’s plenary.

Reacting to Buhari’s failure to honour the House of Representatives invitation, Fayose via his twitter handle opined he (Buhari) does not have regard for other arms of the government.

“Before and after 2015, those of you who were opposed to my views on the Buhari’s Presidency then cannot but agree today that Nigerians were misled to have elected him.

“Methinks they should publicly apologize for misleading Nigerians just like others have been doing.

“I said it on December 1, that President Buhari won’t honour the House of Reps invitation on the worsened security situation in the country. Truly he didn’t.

“With a democratically elected President who does not have regard for other arms of govt, how else do you describe a dictator”.