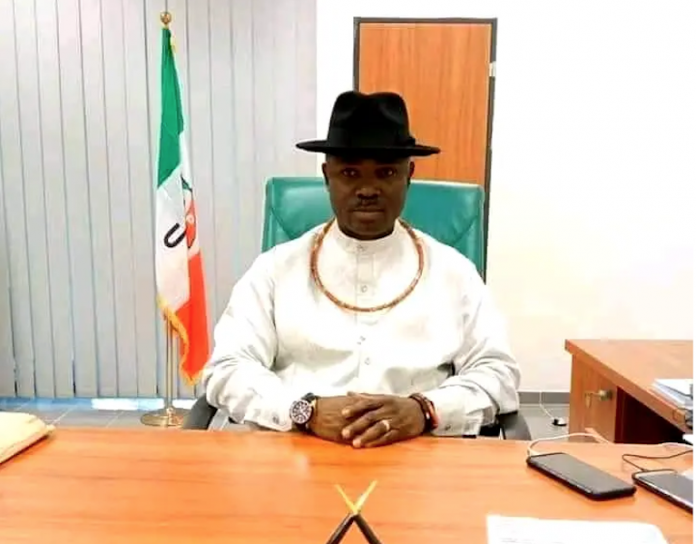 Following President Muhammadu Buhari’s October 1, 61st Independence Day anniversary address, where he alleged that an unnamed federal legislator is the financier of terrorism and separatist agitation, a member of the House of Representatives, Hon. Ben Igbapka, was detained for four hours at Ghana’s Kotoka International Airport.

Igbapka said he was informed by the Ghanaian authority that they wanted to make sure those Nigerian lawmakers who had already been tagged as sponsoring terrorism did not come into the country to cause problem. He noted that by not naming the member of the National Assembly who was allegedly sponsoring secessionist groups in the country, Buhari has made all the 469 lawmakers suspects.

Igbapka spoke at the plenary on Tuesday where he moved a motion under Order 6 Rule 2 and Section 17 (A) of the Legislative Houses (Powers And Privileges Act 2017.

He declared that his privileges had been breached by the president’s address. The lawmaker revealed that a few days earlier, he was in Ghana to attend a wedding ceremony, and was detained for four hours based on the allegation made by the president. In his ruling, House Speaker, Hon. Femi Gbajabiamila said Igbapka’s motion was noted and that the House would get back to him on the issue.

In the 33rd paragraph of Nigeria’s 61st Independence Day anniversary address, President Buhari had alleged that high-profile financiers were funding terrorist and separatist activities in the country. He then stated that his administration is vigorously chasing these terror funders, particularly a serving member of the 9th National Assembly.

His words: “The recent arrests of Nnamdi Kanu and Sunday Adeyemo, and the ongoing investigations being conducted have revealed certain high-profile financiers behind these individuals. We are vigorously pursuing these financiers including one identified as a serving member of the National Assembly.”

The emerging consensus is that the president has all the state apparatus to track, identify, name, prosecute and shame terrorism sponsors in the country. Why is he holding back? Current strategies of effective anti-terror war show that identification and efficient blockage of their funding, which is its critical facilitator will lead to quicker conclusion of anti-terror warfare.

This has guided the new design of counter terrorism templates in many countries today. It is paying off handsomely. The Terrorism (Prevention) Act 2011 (as amended) expressly prohibits the funding of terrorism. This Act tacitly recognises that funding is a key driver of terrorism.

Although President Buhari didn’t mention Boko Haram within the contest of his peculiar allegation, that insurgency group has killed over 40,000 people with two millions displaced, according to reports.

Current developments by the UAE and US governments which have taken specific actions and offered a helping hand to Nigeria, indicate in clear terms the path Nigeria ought to thread in battling its long-drawn anti-terrorism war.

It could be recalled that recently, authorities in the United Arab Emirates (UAE) named six Nigerians with ties to insurgent group Boko Haram as terrorist financiers. The UAE Cabinet issued Resolution No 83 of 2021, designating a total of 38 individuals and 15 entities on its approved list of persons and organisations supporting Boko Haram and other terrorist cause.

The resolution demands that regulatory authorities monitor and identify any individuals or entities affiliated with or associated with any financial, commercial or technical relationship and take the necessary measures according to the laws in force in the country in less than 24 hours.

The court found them guilty of setting up a Boko Haram cell in the UAE to raise funds and material assistance for the insurgents in Nigeria. In December 2019, a UAE Federal Supreme Court also turned down an appeal by the six Nigerians, upholding the ruling of the appeal court. The Nigerians were said to have transferred up to $800,000 in favour of Boko Haram between 2015 and 2016.

In weighing the 8th and subsisting 9th National Assembly, many observers are surmising that such quirky presidential allegation of terrorism sponsorship by an unnamed federal lawmaker was sufficient to draw at the least a slap on the wrist from the federal legislators’ leadership.

Whatever the case may be Nigerians are waiting and watching.