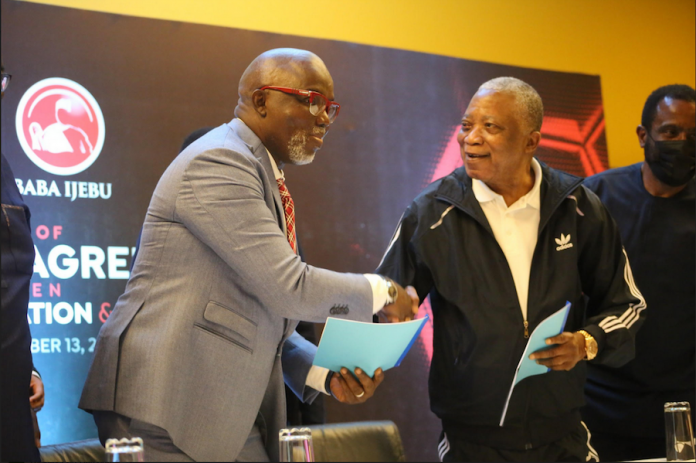 The Nigeria Football Federation (NFF) and Premier Lotto Limited popularly known as Baba Ijebu, yesterday formally sealed an agreement for the betting company to become the Official Bet Sponsor of the National Teams.

At the brief but colorful ceremony at the Eko Hotel in Lagos, NFF President, Amaju Pinnick expressed his joy at adding the Premier Lotto deal to the other corporate Nigerians that have identified with the country’s football.

“Today’s event makes me very happy because it takes us even closer to the financial autonomy that we so much desire, so that we can remove entirely the burden of funding the National Teams from the Government.

“Premier Lotto is a company with high integrity and we are happy to have this relationship with Chief (Kessington) Adebutu and the company,” observed the CAF and FIFA executive committee member shortly after signing the documents at the ceremony.

Although the details of the partnership were not disclosed, the Premier sports betting mogul, Chief Kesington Adebukunola Adebutu, known as ‘Baba Ijebu’, admitted he made his first public outing in 18 months at the event for the sake of Nigeria’s football.

He stressed further that he opted to personally attend the ceremony as a way of giving back to the sport – football – which launched him into financial prosperity.

“Am personally here because of the importance I attach to this ceremony…I made my money from football”, he said pointing out the breakthrough he had in the 1970s when he set up the ‘Face to Face Million Dollars Pools.

According to him, before he ventured into the business, pool betting in Nigeria was dominated by the Lebanese.

“Because we are Nigerians, the citizens supported us and we were able to diversify”, remarked Baba Ijebu who termed his gesture as a way of giving back to the nation’s lead sport that launched him into financial prominence.

Apart from the partnership with the NFF, Chief Adebutu also expressed his joy that the National Stadium in Lagos which his company is renovating will soon be ready for use again.

In 2016, ahead of Super Eagles qualification for the 2018 FIFA World Cup in Russia, Chief Adebutu donated N50million to the Nigerian senior national team to celebrate their victory over Algeria.