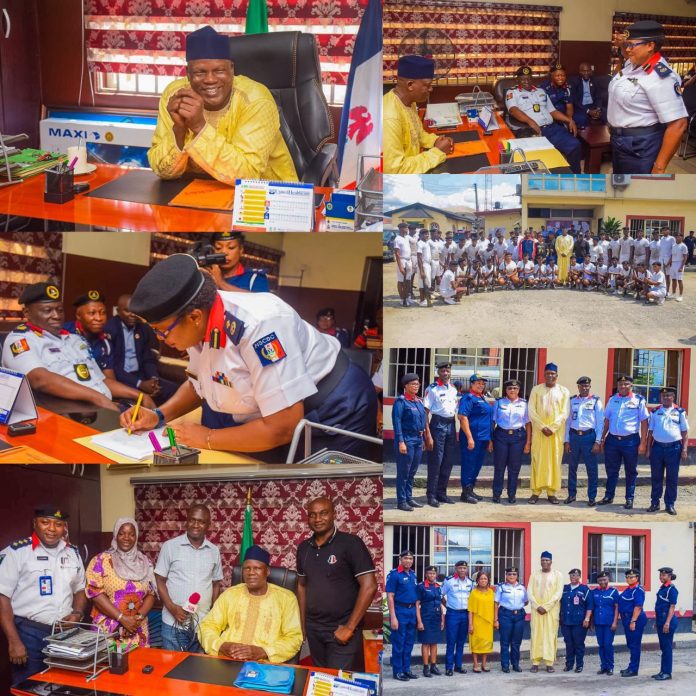 In a press statement e-signed and released to the National Association of Online Security News Publishers, NAOSNP by the Rivers State Command Spokesperson, DSC Olufemi Ayodele stated that, “The Nigeria Security and Civil Defence Corps Rivers State Command has reiterated her unwavering commitment to the fight against oil theft, illegal oil bunkering and illegal dealings in petroleum products in Rivers State.”

According to the statement, “While signing the handover notes at the Command Headquarters in Port Harcourt the newly promoted Assistant Commandant General Abu Tambuwal FCAI expressed overwhelming joy and fulfilment in pursuant of the Corps mandate with a renewed vigour to combat all acts involving the operation of illegal refineries, vandalism of oil pipelines and all human activities leading to environmental degradation, pollution and economic sabotage.”

ACG Tambuwal said his handing over of the Command to the Second in Command (2ic) is in tandem with the directive of the Commandant General Dr Ahmed Abubakar Audi mni. who is wholly committed to rejig and reposition the Corps for effective service delivery in safeguarding the Nation’s Critical National Assets and Infrastructure as well as the protection of lives and properties.

I assure you that the fight against vandalism and all acts constituting sabotage to our economy as a nation will continue relentlessly. My message to illegal oil dealers and those operating local refineries is that they should desist from such unscrupulous businesses, look for a legitimate venture or face arrest and prosecution by the law”

In the heights of the handover ceremony were presentation of gifts to the ACG by Management Staff officers, the Divisional officers amongst others; In addition, the Media reporters conveyed their unreserved congratulatory messages to ACG Tambuwal for upholding the mandate of the Corps with utmost diligence and dedication which obviously impacted the security architecture of the State positively most especially through drastic reduction in health hazards usually occasioned by ” Heavy smoke from illegal bunkering activities”.

The Acting State Commandant, DC Claire Okpo has assured the good people of Rivers State that the Command under her watch will continue to keep the flag flying without relenting; she called on the public to furnish the NSCDC Rivers State Command with sustained intelligence report needed to nip in the bud all acts of criminalities the State.

UBA announces appointments to Group Board and Africa Operations