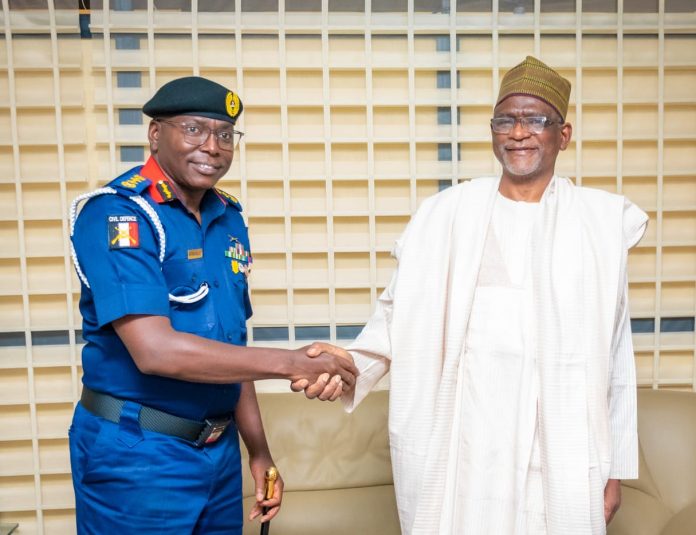 Worried by the spate of insecurity across schools in Nigeria, the Commandant General of the Nigeria Security and Civil Defence Corps, Dr Ahmed Abubakar Audi mni, has assured that the Corps is taking serious measures towards improving security within and around schools in the country to arrest the present ugly trend.

The CG made this reassuring statement in Abuja when he led top management of the Corps and the Special Female Squad on a courtesy visit to the office of the Honourable Minister of Education, Mallam Adamu Adamu, at the Federal Secretariat, Abuja.

Audi explained that the Corps carried out an empirical study that gives her the impetus to establish the School-Community Security Vanguard (SCSV) which requires input of all stakeholders by contributing through information sharing to enable security agencies take appropriate measures.

The establishment of a well trained Special Female Squad (SFS) at the National Headquarters and down to states necessitated deployments to schools where both the kinetic and non-kinetic approaches being adopted by the Corps is yielding commendable results within the framework of deliberate measures and plans to ensure security in our schools.

According to the Corps helmsman, it is expedient to partner and seek the support and collaboration of the ministry of education to stamp out abduction, kidnappings and attacks on schools through strategic action plans put in place by the current leadership of the Corps.

He further stated that the blueprint for cooperation between the Corps and the education ministry is ready and would soon be harnessed and implemented to end kidnapping, bandits attack and insecurity in schools with a view to restoring the confidence of parent, teachers and students themselves.

Responding, the Minister of Education, Mallam Adamu Adamu stated that the present challenges in our educational system are surmountable with the participation of all critical stakeholders including the Corps.

He commended the CG for establishing the female squad and expressed readiness to strengthen the Squad and support the Corps for improved security in schools.

He expressed worry over the spate of insecurity and suggested the construction of perimeter fencing and walls to boost security and limit assess into the school premises, aid surveillance and reduce vulnerability.

Adamu explained that there is a National policy on the protection of schools in the country and expressed confidence in the NSCDC zeal and efforts in championing the safe school initiative.