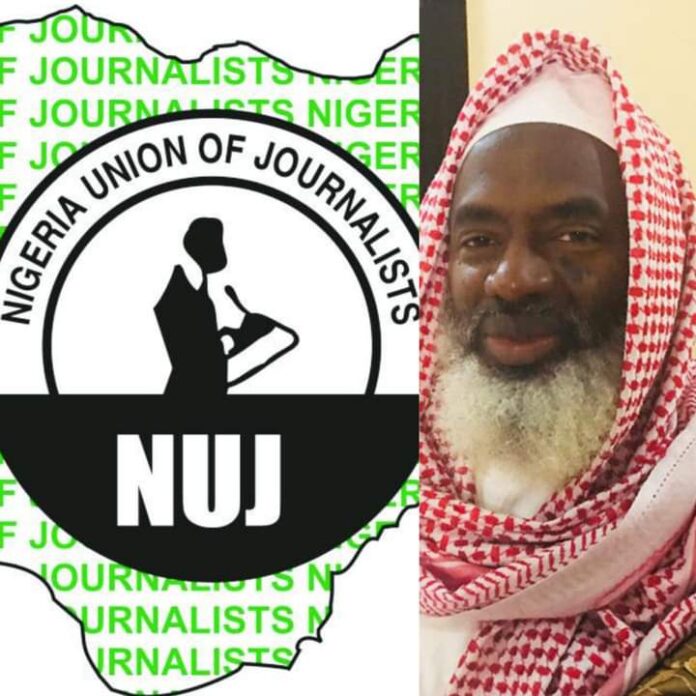 The Nigeria Union of Journalists (NUJ) has lambasted Sheikh Ahmad Abubakar Mahmud Gumi for referring to the journalists as criminals.

In a statement by its National President, Chris Isiguzo, the Union condemned, in strongest term, the remarks made on Arise TV last Wednesday by Sheikh Ahmad Abubakar Mahmud Gumi where he labeled Journalists as criminals for calling bandits criminals.

The statement read: “We do not see any correlation between journalism and criminality.

“Specifically, Sheik Gumi said “you are emphasising on criminality, I don’t know. Even the Press (journalists) are criminals too because they are putting oil into fire [sic]. These people are listening to you, don’t address them as criminals”.

It is instructive to note that one of the gangs that was recently interviewed by Nigerian journalist, Abdulaziz Abdulaziz and published in Daily Trust of today where the bandit leader insisted on being introduced properly as “Kachalla Halilu Sububu Seno, Leader of all Terrorists. He is the Leader.” Yet Malam Gumi insists they are not criminals.

“This unnecessary and unprovoked attack on members of the media by a hitherto respected cleric who decided to embark on strange errands, is unacceptable and it is becoming clearer now that he is pursuing a different agenda. We equally recall a recent statement credited to Sheik Gumi where he was inciting bandits, by encouraging religious biases among soldiers on the battlefield.

“We are more shocked that the same Sheik Gumi who has used the media to speak to leaders and to advance the course of his mission to the bandits across the Northwest, is at the same time attacking the Journalists for simply describing bandits as criminals.

“Sheik Gumi’s attempts to seek amnesty for killers and abductors of innocent citizens, especially school children is most unfortunate.

“We invite Sheik Gumi to explain to Nigerians why despite his recent negotiations with bandits in Zamfara State, the criminals have continued maiming, killing, raping and kidnapping innocent citizens, including the 300 female Students just abducted in the same State.

“In saner climes, Sheikh Gumi, a non-state actor involved in negotiations with criminal elements, should have been behind bars, but alas, thanks to the weaknesses of our Leaders, he continues with his reckless comments and forays into bandit territory unabated.

“By insulting the Press as “Criminals” Sheikh Gumi has exposed himself the more as an intolerant person who will not want his activities closely scrutinised by the media. It is instructive to remind Sheik Gumi that by embarking on such an errand and choosing to speak for the bandits, the Press will continue to scrutinise his activities and also hold him accountable for his actions as enshrined in the Constitution.

“His reaction was totally unacceptable, dishonourable and reprehensible and we demand a retraction of his untoward, irritating and awkward utterances which negate simple decorum and civility. We therefore caution him to remember that “riding the tiger might be an exhilarating experience but the consequence are bound to be unpleasant.” He should thus be guided.

“We equally invite the global community to document the utterances and actions of Sheik Gumi and to hold him to account for any bandit related mishap that may happen to Journalists around the country.”

HOW GLOBACOM HAS BEEN MAKING OJUDE OBA GLOW FOR 19 YEARS