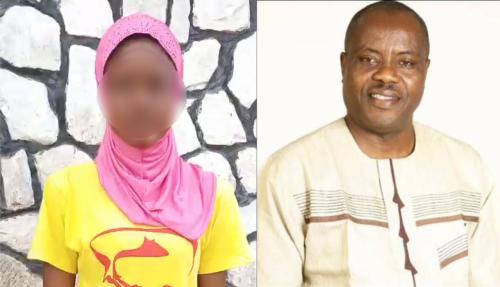 This is coming after the family of the teenage girl appeared in a video on Monday announcing that they would be withdrawing the case and that Nigerians should “allow the matter to rest”.

The Ogun State Police Command has said that it is still investigating the Ogun State Commissioner for Environment, Abiodun Abdul-Balogun, who was earlier accused of sexual assault by 16-year-old Barakat Melojuekun.

The police also said the teenager and her family could not withdraw the case.

This is coming after the family of the teenage girl appeared in a video on Monday announcing that they would be withdrawing the case and that Nigerians should “allow the matter to rest”.

In an exclusive interview with Daily Post, the Ogun State Police Public Relations Officer, Abimbola Oyeyemi, said neither Barakat nor her father could withdraw the case at this point.

Oyeyemi insisted that whether the accuser and her father were interested in the case or not, the police must get to the root of the matter.

“We are still investigating the sexual harassment allegation against the Ogun State Commissioner for Environment and the case has been transferred to the state Criminal Investigation Department.

“Whether the girl and her father are interested in the case or not is not our own business. It is not their own prerogative to say they are not interested.

“The father has no right to withdraw the case because he is not the direct victim.

“The victim herself is not capable of withdrawing the case. Either they are interested or not, the police must get to the root of the matter,” he said.

Earlier, Barakat and her father, Adesola Melojuekun, in separate videos on Facebook, made an appeal, noting that they would not be pursuing the matter again with the police.

The teenager had accused the Commissioner for Environment, Abdul-Balogun, of sexual harassment which allegedly occurred at Ita Otu, Ogun Waterside Local Government Area of the state.

According to Barakat, the sexual harassment occurred on Thursday, December 31, in the commissioner’s apartment, where he allegedly fondled her breasts and muttered incantations while she screamed and struggled to free herself from his grip.

The victim, in her confession to the police at the Abigi Division, had narrated that the commissioner’s aides lured her to his house and his bedroom, after which the commissioner came in and bolted the door.

The commissioner had refuted the allegations, saying they were “lies, blackmail and the handiwork of his local political opponents”.

However, the Ogun State Government had on Sunday suspended the commissioner pending the outcome of investigation into the matter, saying Abdul-Balogun should hand over to the Permanent Secretary in the ministry.

In videos on Monday, Barakat came out in a video, appreciating Nigerians for their support and concern, but pleading that the matter should be laid to rest.

She said, “You can recall that I was the young lady in the viral video about sexual harassment by the Commissioner for the Environment in Ogun State. I am using this opportunity to thank all meaningful Nigerians that showed their support and love towards this matter.

“And I want you to know that there are a few misconceptions and misunderstandings between me and the Commissioner. I now want to use this opportunity to appeal to well-meaning Nigerians to please allow this matter to rest. Thanks.”

Also, the father, Adesola said, “I want to thank the media for their doggedness and aggressive support to make sure that justice is done.  I also thank the international community and well-meaning Nigerians who showed their love and support towards this matter.

“I discovered that there were a few misconceptions and misunderstandings along the line between my daughter and the honourable commissioner. Having discovered this, I deemed it fit to call Nigerians and the international community that this matter should be allowed to be laid to rest.

“As the father of Barakat, I appeal to Nigerians and the international community and media too that I don’t have interest in this matter again. I am withdrawing my case and I want them as well to support me the same way they did at the beginning of the matter. I am very grateful for the show of love and support.”