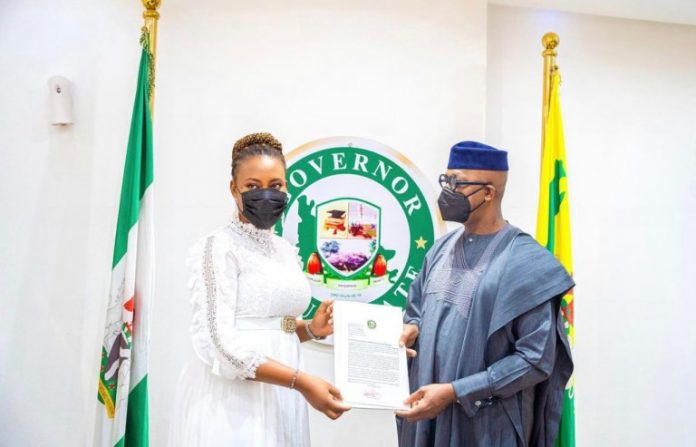 *We do not make promises we can’t keep – Abiodun

* I am very fulfilled – Adesina

In the prescient workings of his mind, Abiodun wishes to elevate virtuosity over dross hence his inspiring gift to Joy Adesina, who emerged the Best Graduating Student from the Faculty of Clinical Sciences, Obafemi Awolowo University (OAU), Ile Ife, Osun State.

To encourage her, Governor Abiodun gave her a house, N5million and a scholarship for further studies. Announcing the rewards at a reception organised in honour of Adesina, yesterday, Abiodun noted that the medical scholarship would be for her residency at the Olabisi Onabanjo University Teaching Hospital, Sagamu.

The governor said Adesina’s emergence as the best medical graduate to have come out of the OAU, is “an accomplishment, a rare feat that most of her peers can only dream of.”

Adesina,, who scored 10 distinctions and won nine top awards in her final exams, appreciated the gesture extended to her by the state governor, saying: “I am very fulfilled.”

She thanked her uncle, Dr. Akinwunmi Adesina, for “his inspiration” and parents for their love and support to achieve the feat at the medical school.

Governor Abiodun said: “Her accomplishment is coming on the back of the spectacular performances of some of our young indigenes, who recently excelled in their academic pursuits and were duly rewarded by our administration under a programme called the Ogun Academic Laureates.”

The governor noted that by inaugurating the Ogun Academic Laureates Awards, his administration had introduced hope to rekindle passion for excellence in academic excellence and innovation, especially for the successor generation.

He reiterated that his administration would continually recognise and honour exceptional indigenes or residents of Ogun State, who by a dint of hard work attained academic excellence and were found worthy in character and innovations.

He disclosed that the Laureates have been fully rewarded with the promised scholarships, cash prizes and houses, stressing that “we did this, not just because it is the right and honourable thing to do having made the promise, but also because we are a promise-keeping administration. We do not make promises that we do not intend to or cannot fulfil.”

There is no gainsaying Governor Abiodun intends his gift to Adesina to inspire Ogun youths; it was meant to manifest as vaunting totem of responsibility and respect for hardwork, honest endeavour, resourcefulness, and genius.

Abiodun is determined to institutionalise a culture of celebration of Ogun State’s unappreciated and under-served true heroes and heroines.

The loud clangour of his intent resonates as his government’s native lyric, no doubt. It asserts that among other things, his government is pro-citizenry and he is a man of the people.

SENATE CONFIRMS YAKUBU AS INEC CHAIRMAN FOR ANOTHER FIVE-YEAR TENURE