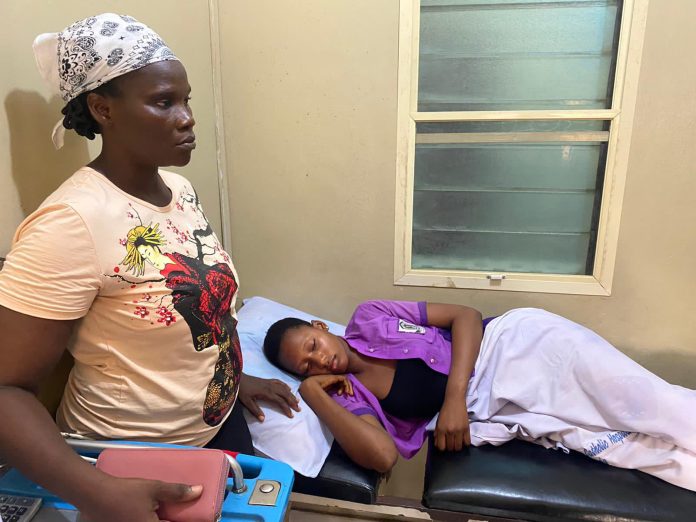 Unfortunately, as a result of the accident, two students were confirmed dead on the spot. The identity of the deceased revealed below:

1. Adedoyin Adebayo,2. Akpolebi Israel Asides from the two deceased, seven (7) females and five (5) males totalling twelve victims also sustained varying degrees of injuries. Corpses of the dead students have been evacuated with the support of officers of the Federal Road Safety Corps (FRSC) and were deposited at the Morgue of the Mainland Hospital, Yaba, for autopsy.

The erring driver has been apprehended and is in police custody. However, the angry students who were later joined by hoodlums set the accidented vehicle ablaze, vandalized the Ojodu Police Station, operational vehicles of the men of Nigeria Police Force (NPF), the Vehicle Inspection Service (VIS) and some private articulated vehicles at along Ogunnusi road.

My heart is broken for the families and friends of students who lost their lives in this horrible accident.

This is a devastating tragedy, my thoughts and prayers are with everyone affected by the horrible accident. My heartfelt condolences to the victims’ families, May God grant them the fortitude to bear the irreplaceable loss.

While I give assurances that justice will be done, we have also commenced proper examination and analysis of the survivors.

I want to also use this medium to appreciate the management of all the schools in the Ojodu School Complex, FRSC, NPF, Lagos State Traffic Management Authority (LASTMA), the management and staff of Lagos State Accident & Emergency Centre and other Private Hospitals that took in victims.

Our special thanks to Mrs. Evelyn Kelechi for her outstanding display of humanitarian zeal which saved the lives of most of these Students. We cannot thank you enough.

Also, we commend the motherly role of the Lagos State Commissioner for Education, Mrs Folashade Adefisayo who represented His Excellency, Mr. Babajide Sanwoolu and was with us all through the night as we attended to the victims and all coordinated the stakeholders meeting held at the Babs Fafunwa Millenium Grammar School this morning.

I want to use this medium to announce the directive of the Lagos State Ministry of Education that all schools within the Ojodu Grammar School Complex remain closed until further notice.

Finally, I implore us all to maintain the peace and remain calm, rather than take to wanton destruction of properties and facilities let us remember the bereaved families in prayer, allow the police carry out a thorough investigation, and avoid seeking self help. I appeal that we respect the family’s privacy. There’s need for calm at this trying time.