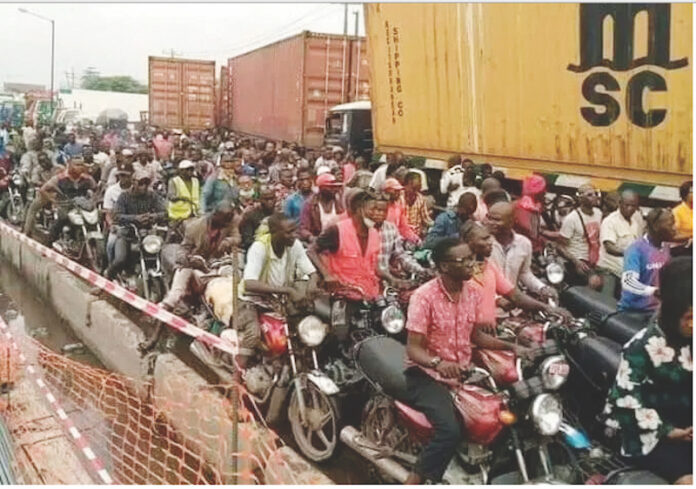 Time for the Lagos State government to brace up security of the state by fully proscribing commercial motorcycles and tricycles is now. – Shola Oyeyipo

As much as governance is about the people, there are times when tough decisions must ignite action, because not until a decision is made, nothing happens. Therefore, the purported plan by the Lagos State government to place a full ban on the activities of commercial motorcyclists popularly known as Okada, is one that must be followed through.

The Governor Babajide Sanwo-Olu administration in Lagos is obviously inundated with the dangerous dimension the activities of commercial motorcyclists is taking; their disregard for state traffic laws and restrictions, hence the decision to ban them totally, and this decision is enjoying considerable support from well-meaning Lagosians and Nigerians alike.

Why so? Despite arguments that this ugly alternative means of transportation, which though helps a good number of Lagosians beat the harrowing traffic experience that often characterises Lagos roads, the disadvantages far outweigh the advantages.

Although one Oladeinde put the statistics of Okada related deaths at 600 between 2015 and now and 10, accidents, those familiar with Lagos traffic know that that is only an official figure.

A lot more people lose their lives daily in Lagos and not a few have sustained debilitating deformations from accidents on commercial motorcycles.

More challenging, however, is the security threat posed to the state by these commercial motorcyclists. A majority of crimes are perpetrated by Okada riders, because it comes handy as a getaway vehicle after crimes are committed, and worst still, with the clamp down on Boko Haram members, bandits and other criminals across Nigeria, Lagos easily becomes the ideal destination and Okada, the easiest business to embark upon.

The recent statement credited to the Lagos State Commissioner of Police, Mr. Hakeem Odumosu, attributing a majority of violent crimes in the state to armed hoodlums, who operate on motorcycles or Okada as they are known, when he appraised the security situation in the state during a stakeholder’s meeting, is no news.

Many Lagosians have had first experiences with criminal Okada riders, who snatch bags, rob people inbroad day light, carry out gang attacks, kidnapping, burglary, engage law enforcement officers in violent confrontations and often get away, because most of their bikes don’t have authentic plate numbers.

Odumosu painted a very graphic picture of the nuisance Okada in Lagos constitute with a review of their activities between January and May 9, where he reckoned that 192 Okada riders lost their live in 280 accidents, noting also that, “The number of deaths recorded in road accidents and crime committed with the use of Okada across the state, had assumed a worrisome dimension.”

According to him, records at the disposal of the Lagos State Police Command indicate that in January,90 Okada accidents occurred; 76 in February, 101 in March, 84 in April and 34 in May (May 9 to be precise), and the number is expected to rise.

He said Okada accidents were often because of recklessness and lawlessness, with some riding on the opposite direction of the roads and making dangerous maneuvers.

Like most other concerned Lagosians, Odumosu advised the Lagos State government to put in place stringent measures to address the negative activities of the commercial motorcycle operators, saying,“Okadas are being illegally used as a veritable means of conveying hard drugs from one point to another.

The consequences of spreading of hard drugs and its consumption are better imagined than said.”

In another revelation, the Lagos police chief said between January and early May, 320 commercial motorcycles were arrested in connection with 218 cases of criminal incidents in which 78 suspects were detained and 480 guns of various calibers seized from them.

The Governor Babatunde Raji Fashola (SAN) administration was about the most concerned Lagos administrator about the activities of the Okada riders. In 2012, he assented to some stringent traffic laws that became operational in the state.

With Section 3 (1) his government banned commercial motorcyclists and restricted their operations on at least 492 of the 9, 200 roads across the metropolis.

Though that decision generated considerable outrage, it was vigorously enforced leading to confrontations with law enforcement agents. Now they are back as if the law has been repealed.

The argument by Okada operators has been that government should not bar them from federal highways that are listed in the Federal Highways Act, cap F13, Law of the Federation of Nigeria, 2004 and that doing so would be infringing on their freedom of movement as preserved in Section 41(1) of the Constitution of the Federal Republic of Nigeria, 1999 as amended.

On the other hand, users of that mode of transportation bemoan that the existing means of transportation do not guarantee ease of movement for residents of the state, and that equally, the road infrastructure are inadequate and under immense pressure.

An observation of commentaries by Lagos residents on social media shows that even though Okada as a means of transportation is helping some people to beat the harrowing traffic in some parts of the state, the people are tired of the activities of the operators, and they look up to the Sanwo-Olu administration to really wield the big stick this time around.

Candidly, however, it shouldn’t just stop at getting them off the road because of the multiple layers of effects such action is likely to create.

First, while it is a known fact that Okada operators and their activities are constituting menace in the state, so many others are making ends meet from the business that has grown to a multimillion-naira industry.

Sending these people to the labour market without a well thought means of engaging them could even have a more disturbing effects on security and social systems in the state.

Also, while government promised to acquire buses to cushion the effects of Okada ban, the problem of traffic jams will continue to necessitate the use of Okada, especially, for those who must get to work or keep business appointments.

For instance, many Lagosians rely absolutely on Okada to get in and out of Apapa. What alternative would government provide for people working in areas such as this?

Proffering a solution to the problem, a former CEO, Lagos Ferry Services, Kalejaiye Adeboye-Paul,suggested that water transportation should be encouraged, but good as this may sound, the question is, ferries cannot get into the inner roads/streets.

A commentator, Seyi Osiyemi also said, “It is common knowledge that Okadas/kekes have become a menace on Lagos roads.

This plan, however, never materialised due to growing level of insecurity.

“What we have in Lagos is a people problem and not necessarily a motorbike problem. I can point to different cities in sub-Saharan African, where activities of motorbike are well regulated without causing a nuisance.

A case in point is Cotonou, where motorbike is provided with dedicated right of way. Kigali is also another example.

“The inability of government to effectively regulate motorbikes is down to the endemic human problems we have in Nigeria, which is also characterised across every sphere of our society.

And this is further compounded by the fact that motorbikes riders are surrogate of the NURTW.”

Certainly, banning Okada on Lagos roads is inevitable, but government cannot leave it at that, all the ripple effects of such action must be considered and addressed.

MICROSTRATEGY ACQUIRES $242 MILLION WORTH OF BITCOIN

IN PRISON BUT NOT IN SHACKLES’, THE TRUE STORY OF GENESIS...