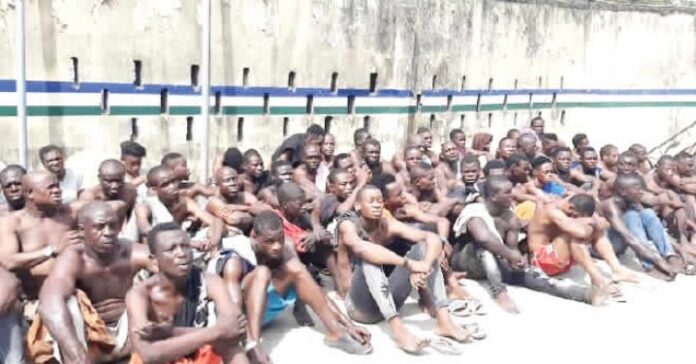 Residents of Itafaji and Agarawu on the Lagos Island in Lagos State have called for the intervention of Governor Babajide Sanwo-Olu and the Commissioner of Police, Hakeem Odumosu, to quell the ongoing tension caused by clashes among youths in the area.

This development resulted from the death of one Tiroo, who was allegedly shot dead by the Agarawu boys during an attempt to rob residents of Itafaji on Sunday.

The  deceased joined other youths in Itafaji area to resist the attack allegedly launched by the Agarawu boys.

According to eyewitnesses, the Itafaji youths were resisting the attack with cutlasses when the Agarawu boys shot indiscriminately and killed Tiroo in the process.

Tiroo’s remains were said to have been buried.

To forestall further attacks, a source said, “We have invited members of the Oodua People’s Congress to apprehend the notorious Agarawu boys and hand them over to the police for prosecution.

“The police are trying their best but these boys are too notorious and have fortified themselves against bullets. We can’t just fold our arms, while they terrorise us. Our own is to complement the police.”

The President, Igbo traders in the area, Dr Chris Onyekachi, said during a stakeholders’ meeting with the police, it was agreed that efforts would be intensified to solve the problem.

Onyekachi stated, “We are using this opportunity to appeal to the Lagos State Governor, Babajide Sanwo-Olu, and the Commissioner of Police, Hakeem Odumosu, to quickly intervene and quench the ongoing crisis between the Onola and Agarawu boys on the Lagos Island.”

When contacted, the state Police Public Relations Officer, Muyiwa Adejobi, said 58 suspects had been arrested in connection with the ongoing clash on Lagos Island, adding that Odumosu had ordered that the suspects be transferred to the State Criminal Investigation and Intelligence Department, Panti, Yaba, for discreet investigation.

He said, “To sanitise and restore normalcy in the Agarawu, Ita-Faaji, Igbosere and other areas on the Lagos Island, which have been under the siege of miscreants and gangsters, the command dispatched a team comprising the RRS, task force, Police Mobile Force, Lagos State Neighbourhood Safety Corps and other local security outfits under the command of ACP Bode Ojajuni, the Area Commander, Area ‘A’, Lion Building, to go after the bad boys in the areas and 58 suspects were arrested on Monday, February 8, 2021, around 8pm.

“The miscreants and gangsters in the areas have attacked and damaged properties several times, while some allegedly lost their lives to their various criminal activities. The CP, Hakeem Odumosu, has deemed it necessary to raise a formidable team to carry out sting operations on the island to restore normalcy in the affected areas.

MY EXPERIENCES IN PRISONS UNDER OBASANJO HORRIBLE –GANI ADAMS

WHY TB JOSHUA’S EMMANUEL TV WAS SUSPENDED ON YOUTUBE REVEALED!