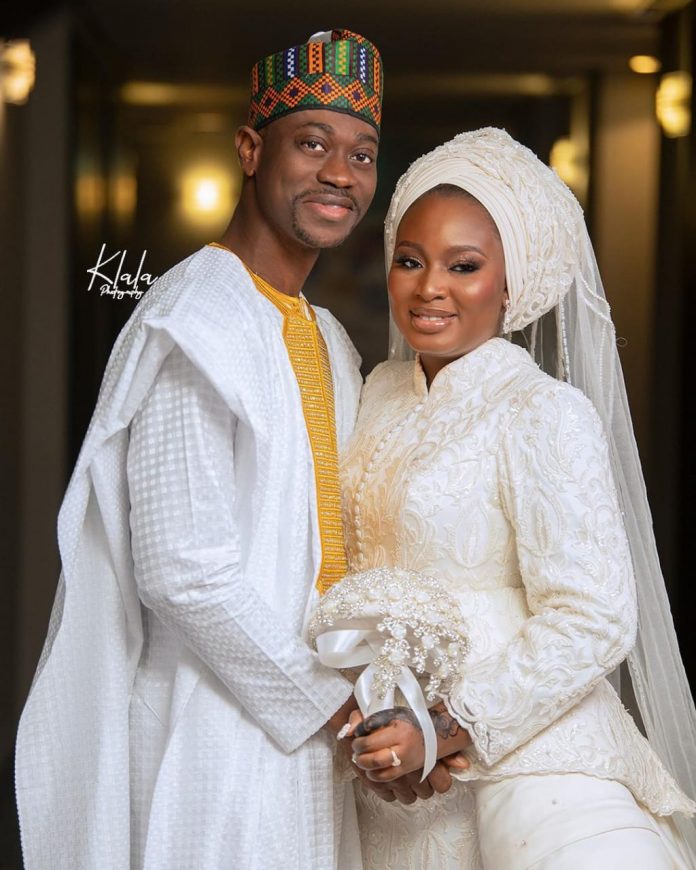 The actor broke this news on his verified Instagram handle early in the morning, accompanied by the beautiful pictures of his damsel adorning a flowing white gown and headcover.

Report learnt that the celebrity couple gathered family and friends, including colleagues and Islamic scholars at Radisson hotel, Ikeja, Lagos for the solemnization conducted according to Islamic rites.

It will be recalled that when the pictures of their traditional wedding hit the airwaves over the weekend, it sparked uproar from netizens, especially from some Muslim fans, who said that it isn’t ideal for a Muslim celebrity of Abdul Lateef’s calibre to marry Adebimpe, a Christian.

Although, some however, said there is nothing wrong with a male Muslim getting married to a Christian.

Some Muslim netizens didn’t only criticise Mo Adebimpe’s chest revealing gown at the traditional wedding held in Ikare-Ekiti, they faulted the Muslim actor for planning to spend the rest of his life with a Christian, saying he would be influenced by his wife to recant Islam.

Report findings revealed that Lateef, who played the lead role of Ayinla Omowura, in an eponymous non-biological musical film, Ayinla is one of the top Muslim actors in Nollywood, with large followership of Muslim and non-Muslim fans

Some of the comments:

In some of the comments, “It’s really amazing that a young man who portrays himself as a good Muslim ended up marrying a Christian. He would be at the losing end eventually. That is the trend among Yoruba celebrities.

“Marrying a devout Christian is like winning a jackpot to them. In the long run, the convert-thirsty Christian Pentecostals will name the lady a deaconess. God bless their home anyways.”

For Abdulsalam Bashir Gobir, he pointed out the pointlessness of marrying a Christian woman, saying: “when a Muslim man marries a Christian girl, the girl won’t practice Islam and she would possibly have full control of the children. On the other hand, if the husband were to be a Christian and the wife a Muslim, the girl would be forced to practice Christianity. We are watching.”

In the midst of all these, AbdRaheem Olaleye said: “There’s no sin in marrying Christian women, in as much as she has accepted and practiced Islam before the engagement. And Allah knows best.

The elated actor, who appeared in white agbada shocked many of his critics when he announced early this morning on social media that his wife, Mo Adebimpe has adopted a Muslim name, Rahmatallah, meaning, Mercy of Allah.

While sharing the pictures of their wedding, Lateef welcomed his new wife to his “world.”

According to him, “ALHAMDULILLAH. May Allah be praised. Adebimpe Rahmatullah, I just want you to know I love you and I will always be there. Welcome to my world.”

Those who criticised his wife’s chest revealing dressings and condemned the actor for getting married to a Christian are beginning to recant their earlier statements, praising him for towing the path of honour.

“Now I am satisfied. Alhamdulilah Rabil Al-Amin”, said Ismail, adding that, “Alfa Lateef, you have done well. You have vindicated yourself. Even though I wasn’t pleased at first, I am happy with this, May Allah bless your Union.

According to Azeemat Najimudeen Jumah, “I’m satisfied too. Congratulations my brother. You married and you converted. More wisdom for both of you Insha Allah

“Alhamdulilah! Only if the busybodies could wait for a little before casting aspersion. They must also use this platform to revert their uncharitable comments on this beautiful new home,” Murtala Adewale noted.

Congratulations to the couple. May Allah bless your home. Ameen.