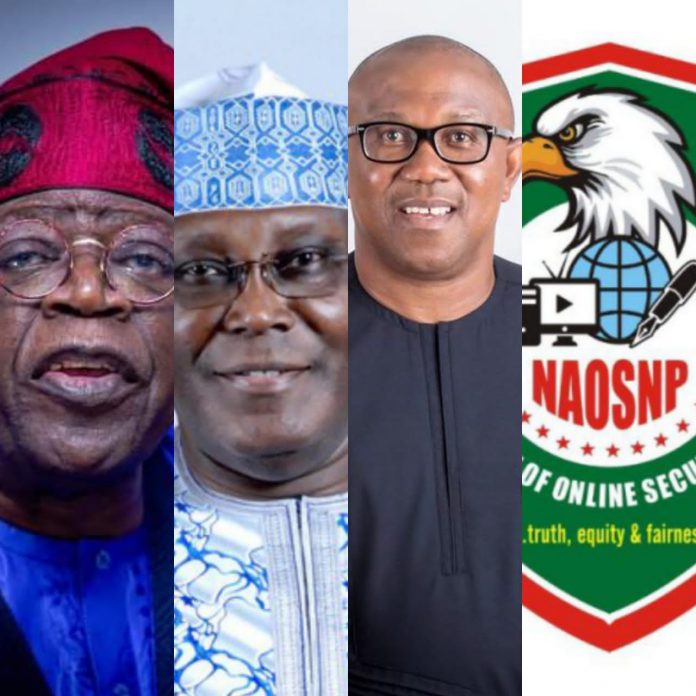 A security and safety reporting based oriented group, the National Association of Online Security News Publishers (NAOSNP), has congratulated flag bearers of various political parties as the race for the 2023 presidential election gathers momentum.

NAOSNP’s congratulatory message was contained in a statement signed by the Association’s Public Relations Officer, Mr Eric Elezuo, urging the candidates to put national interest first as they campaign for who wins the exalted position.

The Association made special mention to the candidates of the ruling All Progressives Congress (APC), Asiwaju Bola Tinubu; the candidate of the opposition Peoples Democratic Party (PDP), Alhaji Atiku Abubakar and candidate of the Labour Party (LP) Mr Peter Obi, noting that by the scheme of things, the next Nigerian president may possibly be one of the three.

The statement observed that the country at this time needs a unifying factor, and one whose influence and acumen will bring an end the raging insecurity, and any of the presidential candidates has what it takes to give the country a new lease of life.

Quoting the President of the Association, Comrade Samson Oki, the statement stressed that the fact the candidates were able to win their party primaries, beating the great personalities that contested against them is a great testament that they will be able to weather of challenges inherent in administration.

Oki also called on the candidates to observe a rancour free campaign devoid of name calling and mudslinging as Nigerians are watching and observing.

The 2023 Presidential election is expected to hold in February 2023, and the winner will take over from President Muhammadu Buhari on May 29, 2023.