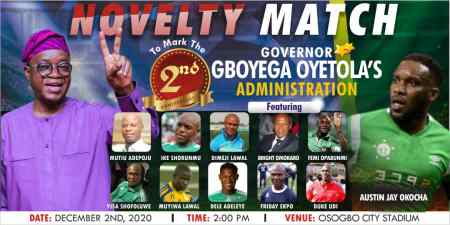 Celebrations of the 2nd anniversary of Governor Gboyega Oyetola in office continue tomorrow with a novelty match between Osun Cabinet members and Osun Parliament, a repeat of last year’s match where the lawmakers’ triumphed.

Speaking about the match, Commissioner for Youth and Sports Development, Mr. Yemi Lawal, who is expected to lead executive arm stated that the event will begin 2pm with an explosive match between the State Ministry of Health and the Ministry of Works, after which the Executives will slug it out with the Legislatures.

“Nothing is too much to celebrate His Excellency, Governor Gboyega Oyetola as his giant strides speak volume. This is why the notable and famous ex-internationals are around to be part of the match between the legislative and Executive arms of Government.

“Everybody is expected to come and witness the artistic displays by soccer legends and technocrats who are already in town,” concluded the Sports Commissioner.

Meanwhile, there will be a flag-off of a Sports Academy at Ile-Ogbo, Ola Oluwa Local Government in the morning by Governor Gboyega Oyetola.

Dignitaries expected at the Osogbo Township stadium, venue of the novelty match, organized by the Ministry of Youth and Sports Development include the Governor, State of Osun, Mr. Gboyega Oyetola, Deputy Governor, Mr. Benedict Alabi, APC Chairman, Prince Gboyega Famodun, Chief of Staff and his Deputy, Secretary to the State Government among others while the Speaker, Osun House of Assembly, Right Hon. Timothy Owoeye is expected to lead lawmakers to the event. 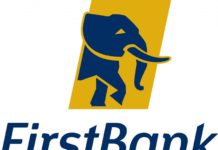 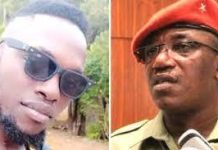