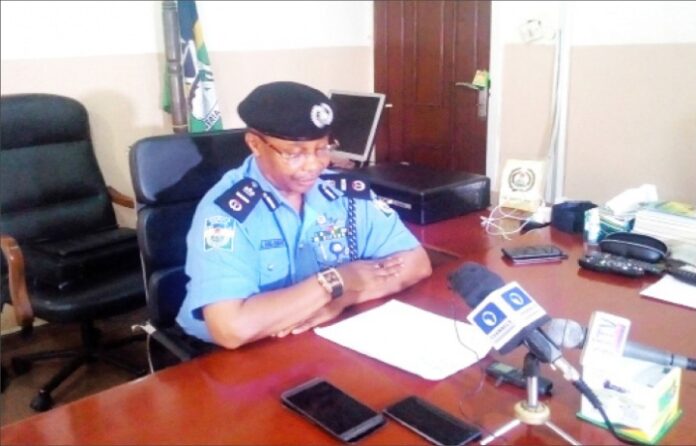 There is palpable ten­sion at Police Force Headquarters (FHQ), Abuja, over the pro­motion of an Assistant In­spector-General of Police (AIG) to the rank of an act­ing Deputy Inspector-Gener­al of Police (DIG) but is now heading previously promoted DIGs.

The promotion and de­ployment of the AIG, Alkali Usman Baba (former force secretary), to the rank of DIG was announced on Novem­ber 3, 2020, by force spokes­man, Deputy Commissioner of Police (DCP) Frank Mba, in a statement.

Mba had added: “The pro­motion/posting of the senior officers is sequel to the recent vacuum occasioned by the retirement of their former heads, DIG Abdulmajid Ali and DIG Abduldahiru Dan­wawu, after the completion of their statutory years of service.”

AIG Usman Alkali Baba, who is a fellow of the Nation­al Defence College, is from Yobe State.

He had headed Zone 5 Po­lice Command, Benin, and Zone 7, Makurdi.

Before then, he was Com­missioner of Police, FCT and Delta State commands.

As Acting DIG in-charge of Finance and Administra­tion, he is now the most se­nior DIG, above previously promoted DIGs.

Investigations by Daily In­dependent revealed that there are rumbles at Force Head­quarters, especially among older DIGs, over Alkali’s new position.

Our investigations further revealed that he once had an issue with the IGP over the promotion of former chair­man of Economic and Fi­nancial Crimes Commission (EFCC), Ibrahim Lamorde, from Adamawa State.

Lamorde has been in act­ing capacity since the Police Service Commission (PSC) is yet to approve his promotion.

Similarly, the PSC is yet to approve the promotion of Alkali, notwithstanding he is functioning as the DIG (Administration), and all correspondences from older DIGs are forwarded to him, and they take directives from him.

Alkali was said to have complained to PSC that he was supposed to head the FIB but dependable sources at FHQ and PSC told Daily Independent that “he was persuaded to remain as an AIG because he is nursing the ambition of becoming the next IG”.

Our sources further dis­closed that he was persuad­ed to remain in the rank of an AIG so that “when the IG is retiring, the management team (DIGs) would be asked to go with him while he would have the opportunity of being considered for the IG position”.

However, several officers at FHQ, who pleaded ano­nymity, the orised that “the IG may have decided to post him to ‘A’ Department so that when he is retiring, Alkali’s ambition of becoming IG will have been cut short, because the president may appoint the next IG from an AIG rank”.

Other officers, however, theorised that “it may be a strategy by the IG to give him the IG position; if the presi­dent decides to tell him (IGP Adamu) to hand over to the most senior DIG, Alkali will automatically get it”.

Daily Independent check revealed that there are un­derground moves by many senior officers against Alkali taking over as the next IGP.

One of the reasons adduced is that the new Police Act stipulates that the next IGP must have not less than four years more in service.

Those who spoke under strict anonymity stressed the need for President Muham­madu Buhari to appoint the next IG from the South.

They argue that there is so much animosity in the Force because only northern Muslims are posted to juicy positions.

One of them said: “I want to believe that if the pres­ident appoints the next IG from the South, there will be equity in postings.

“The police is now politi­cised, otherwise officers should be posted based on their pedigree and the abili­ty to combat crime without political coloration, and not on religious or ethnic affili­ation.”

Our investigations further revealed that former Chief of Staff to President Buhari, late Abba Kyari, was solidly behind Alkali.

Sources said that the late Abba Kyari had assured Al­kali of the IG job.

“I MIGHT NOT (ALLOW MY SON TO REPRESENT NIGERIA) ...

AMBODE MUST APPEAR BEFORE LAGOS ASSEMBLY OVER INFRACTION