The Oyo State chapter of the Peoples Democratic Party (PDP), on Tuesday, berated the State’s chapter of the All Progressives Congress (APC) for celebrating the polluted electoral process which took place during the Kogi State governorship election held on November 16.

The Oyo PDP, in a statement by its Publicity Secretary, Engineer Akeem Olatunji, said that only politicians with killer instincts, propensity for vote stealing and electoral corruption would celebrate the rape of democracy witnessed in Kogi last weekend.

The PDP spokesman commended the role played in Kogi State by the Governor of Oyo State, Engineer Seyi Makinde, declaring that as the Chairman of the PDP Kogi State Governorship Campaign Council, Governor Makinde discharged his responsibilities creditably and honourably.

The statement described a statement by the State’s chapter of APC, which attempted to mock the role played by Makinde and the loss of the PDP in the election, stating that the APC displayed “a show of buffoonery and the height of insensitivity to the families of ten persons who were felled by the bullets of sponsored marauders, who denied the PDP of its victory.”

According to the statement, the claim by the APC that Governor Makinde abandoned his duty post to relocate to Kogi State was untrue, baseless and an indication that the Oyo State APC has become frustrated with itself, being the bad loser that it has proven to be.

“Since it was thoroughly defeated by Engineer Seyi Makinde at the March 9 Governorship election in Oyo State, the APC in the state has become an object of pity that has been clawing at one form of hallucination after the other,” the PDP said.

The party added: “For want of what to say, the APC criticised Governor Makinde for allegedly abandoning his duty post, failing to keep major cities clean and equally failing, according to it, to pay the new N30,000 minimum wage.

“All these are at best phantom allegations, tissues of lies, opportunistic comments and a display of arrant ignorance.

“Besides, the APC, which ran a government that was unable to pay the national minimum wage of N18,000 for eight years previously should be ashamed of dabbling in such a discussion at this stage.

“It is on record that Governor Seyi Makinde has been doing its best to succeed in the task of keeping Ibadan and the major cities clean, though the challenges being faced in the sector right now are due to the booby traps set by the APC government, which never wished the PDP and the people well.”

The statement further stated: “Makinde, who the people know as a governor with a difference, will never abandon his duty post without doing the right thing. He has been working round the clock to keep Oyo State clean despite concerted efforts by APC loyalists to sabotage the government.”

The PDP maintained that the description of Governor Makinde as an ‘unofficial caretaker governor with a fake mandate’ demonstrated the height of irresponsibility and crass ignorance of APC leaders.

“Let it be stated clearly that the machinations of the APC to benefit where they did not sow will not materialise in Oyo State. The people of Oyo State voted massively to reject the APC and bring in Governor Makinde. The people are resolved to defend that mandate by all means necessary.

“Let us also say that the victory of Engineer Makinde in a free and fair election has been affirmed by the Election Petition Tribunal and the Court of Appeal.”

The PDP noted that Governor Makinde, in the course of his duty as the chairman of the PDP Kogi State National Campaign Council carried himself in a manner befitting of an Omoluabi and leader of the Pacesetter State, adding that Makinde saw to the delivery of an issue-based campaign and peaceful comportment of the party’s affairs before, during and after the poll, despite the provocations and evil manifestations of the APC.

“The APC’s statement, in which they deployed their best weapons of lies, misinformation and gutter languages to attack Governor Seyi Makinde on his recent assignment as the chairman of the PDP National Campaign Council for the Kogi State Governorship election was irresponsible and reckless.

“We unequivocally condemn the content of the statement as the height of buffoonery and crass disregard for the laws of the land, as no sane Nigeria would seek to claim the seat of a state governor on the pages of newspapers as Oyo APC tries to do.

“But for the need to set records straight, we would have ignored the bunkum and a not-well-thought-out statement from a party that is sinking and looking for anything to hold to halt its downward slide. While the saying goes that silence is the best answer for a fool, the Oyo State public should note that this response becomes necessary in other not to suffer fools gladly.

“Governor Makinde, indeed, served meritoriously as the chairman of the Kogi campaign council and Nigerians of Kogi State extraction as well as PDP members across Nigeria would attest to the fact that he was a huge plus to the PDP’s aspiration in the election.

“The party’s campaign in Kogi was issue-based and peaceful because an individual like Governor Makinde, who is renowned for his peaceful disposition to politics, was involved. The PDP could boast of having a campaign council chairman that was not an apostle of violence or a national disgrace that would kneel to beg that people should replace good governance with sentiments.

“But since the APC and its master-rigging mechanism has had the day in Kogi State, with the PDP, left to turn to the Courts to reclaim a mandate that was obviously stolen through violence and brigandage, it is ludicrous for the Oyo APC, in its desperate bid to remain relevant, to mock Makinde over an exercise it blatantly rigged.

“We were not surprised that the Oyo APC decided to celebrate the triumph of violence, deaths and electoral fraud in Kogi, we know that is their hallmark. We were also not surprised that Oyo APC has not snapped out of their daydreaming about the governorship seat and has resorted to being lawless and puerile by not allowing the law to take its cause on the election petition matter, of course, desperation and fraud are innate to the APC. Their winner-takes-all disposition to politics is already eating deep into the fabrics of democracy and this is demonstrable in their unjustifiable obsession with taking over the governorship seat in Oyo State through judicial fraud, despite having been rejected by the electorate.

“However, we will not sit and watch the APC spin lies about Governor Makinde with a view to turning the people against him. Makinde did not spend a dime of Oyo State’s money to fund election in Kogi and if anyone has evidence to the contrary, he should present such or forever remain silent.

“We challenge the APC to come out with facts in their statements, which are daily become a culture of celebrating buffoonery. They need to learn to stop playing opposition politics devoid of intelligence and sound reasoning.”

ATIKU PLEDGES TO WORK WITH STAKEHOLDERS TO END ASUU STRIKE 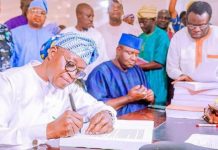 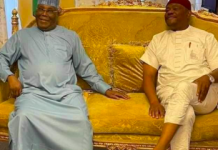