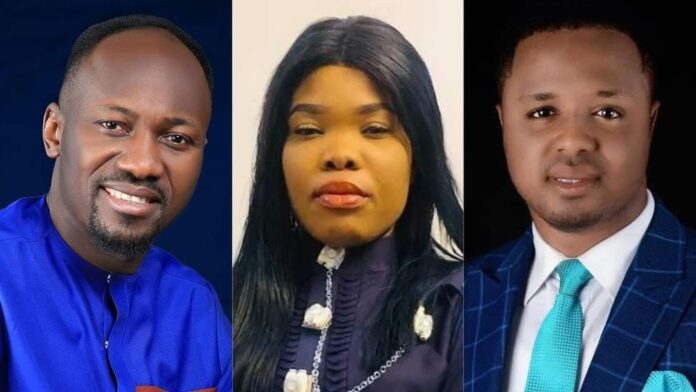 A former pastor with the Omega Fire Ministries International, Mike Davids has apologised to Apostle Johnson Suleman after accusing him of having sexual relations with his wife.

You would recall that Mike Davids, a former pastor of Omega Fire Ministries, claimed that Apostle Suleman slept with his wife and threatened to make him “disappear”.

He alleged that Apostle Suleman slept with his wife while still in the ministry, then transferred her to Abuja, where she is now heading the church’s branch.

He also alleged that the clergyman had stopped him from seeing his three children and threatened his life.

He further claimed that Apostle Suleiman cast a spell on his wife.

His wife, Pastor Edeko, had responded, saying that her husband’s allegations are cheap blackmail.

She said it was Davids who walked out of their marriage and that she suffered so much abuse while she was still living with him. She said she even contemplated suicide, but her son stopped.

Davids, however, said he had been on a “spiritual sojourn” and received instructions from the Lord to apologise to Suleman.

He referred to Apostle Suleman as “my father in the Lord.”

He also apologised to Omega Fire Ministries and Apostle Suleman’s wife. However, he didn’t apologise to his estranged wife, who he accused of adultery.

After working as an assistant pastor in the Armor of God Church in Lagos from 1998, Apostle Suleman started Omega Fire Ministries in 2004

2FACE ACCUSED ME OF SLEEPING WITH HIS WIFE, ANNIE: SENT THUGS...