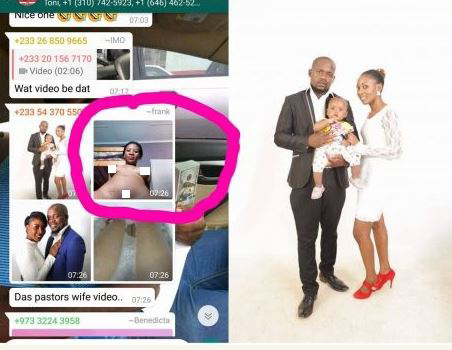 In the video circulating on social media, Osofo was seen in a bathtub with her two legs wide open.

It was later gathered that the pastor’s wife was trying to send the video to her husband not knowing when she sent it to the group.

1st News gathered that Osofo Maame, who has become a subject of public discussion; especially among members of the husband’s church, was reported to have tried drinking a liquid poisonous substance; but was stopped by her family members.

The preacher’s wife in her mid-30s who is nursing a 6-month-old baby, intended to send the pictures to her husband who was on a trip outside the country only for it to be mistakenly sent to the church group.

Worse, the news source said the woman sent a message that reads “It’s all yours when you return.” Members of the church group who received the photos, videos and message were shocked and outraged.

In the two separate videos, 58 and 31 seconds respectively; she is seen facing the camera, kneeling; wiggling her waist and handling herself concurrently. That was after she was earlier captured in a bath showcasing her thighs.

Due to the strict ethics of 1st News,  the video will not be published here; due to its graphic nature but you can watch it via the link below.