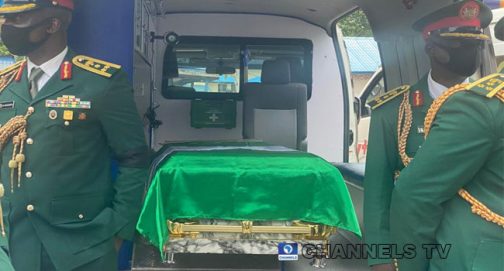 The burial ceremonies for all the 11 victims of the Nigerian Air Force crashed Beechcraft 350 were held in Abuja today, with wives and relations inconsolable.

Here are some photographs from the National Mosque and the Protestant Church, Air Force Base Abuja.

According to reports monitored on Channels TV, the solemn service began with an opening prayer by the presiding priest, Reverend Group Captain Dogo Gani, Director of Chaplaincy NAF headquarters.

Wives of the deceased officers broke down in tears at the church service.

Janazah prayer was also held for muslim officers at The National Mosque, Abuja.

The funeral here was for six officers.

All the dead officers were interred at the National Cemetery in Abuja.

SYLVESTER OROMONI: NO EVIDENCE OF BLUNT FORCE OR CHEMICAL INTOXICATION –...