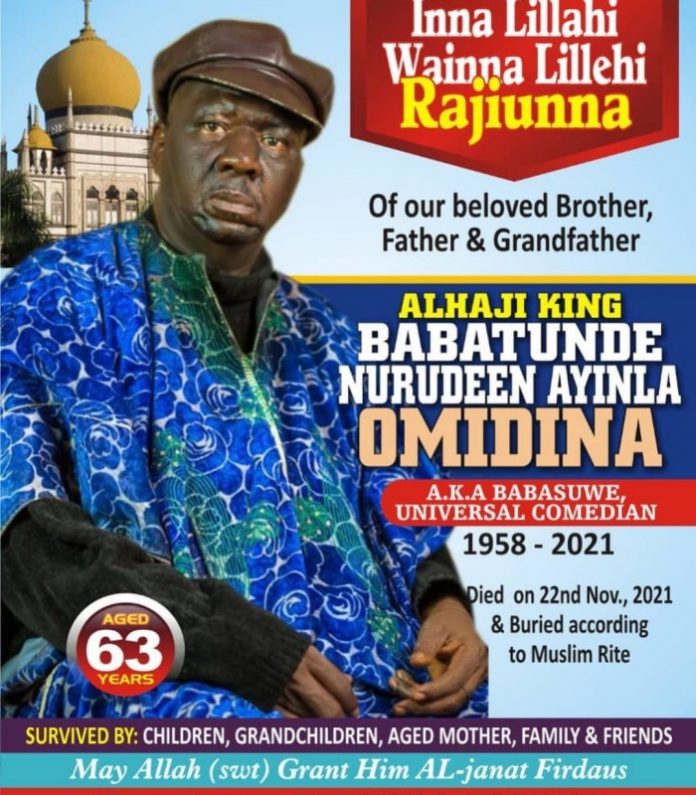 Baba Suwe, who died on Monday after a protracted illness, was buried on Thursday rather than Wednesday earlier announced by the family.

REPORT gathered that the burial was postponed by one day to allow his son based in the United States to return to Nigeria.

“Baba Suwe’s son in the US insisted that they wait for him to return home before his burial. That was the reason why it was moved to Thursday.

“Everything is ready for the burial, it will surely take place on Thursday,” a family source had revealed on Wednesday afternoon.

Adored by fans all over for his acting skills, Omidina came under national scrutiny on October 12, 2011 when he was held at the Murtala Muhammed International Airport, Ikeja, Lagos, by the National Drug Law Enforcement Agency on suspicion of drug trafficking.

He was suspected to have invested several wraps of cocaine and was kept under surveillance by the agency for three weeks.

A Lagos court ordered his release and instructed the NDLEA to pay him N25 million as compensation.

In 2013, the Appeal Court struck out the compensation ruling, insisting that the anti-narcotic agency violated no law in keeping Omidina in custody all through the investigation period.

The comic actor never got back to his old bubbly self after the episode, battling one health condition or another until he finally succumbed on Monday.

Fans of the late thespian have been paying tribute to him since his demise.

WHY IS BUKOLA JESSE AFTER GENESIS?