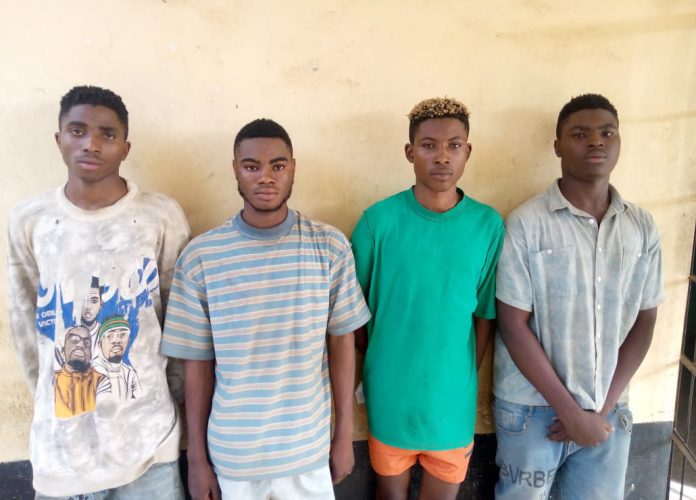 Operatives of the Ekiti State Police Command has arrested four suspects for conspiring to rape and videotaping a 28 years old lady.

According to the statement, “The victim narrated that on 5/4/2022, her boyfriend, one Victor who is currently at large, invited her to Lovely Hotel, Ado-Ekiti. She obliged after much persuasion and went to the Hotel to see Victor.”

To her dismay, according to her, on getting to one of the Hotel rooms where Victor lodged, she met him with about four(4) of his friends who were all drinking alcohol, smoking weeds and catching fun.

According to the victim, she was offered one of the bottles of drink which she took and became unconscious. She regained her consciousness at a point only to discover that one of the suspects was having sexual intercourse with her while others were videotaping them and making fun of her.

The victim said she begged them to conceal the video and delete it but to her surprise, the video was later posted on the social media via Tik-Tok.

She immediately reported the case to the Police who swung into action and arrested the four(4) suspects while effort is ongoing to arrest the other fleeing suspect who is at large.

One of the suspects confessed that he actually had sexual intercourse with her in the presence of the other suspects.

All the suspects arrested will be charged to Court for prosecution.