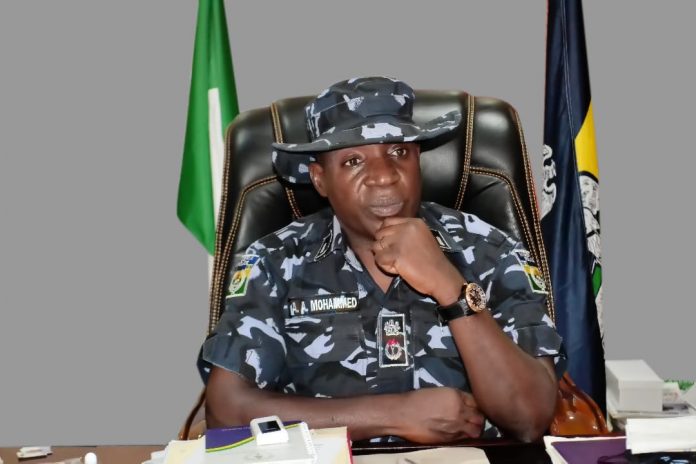 The Delta State Police Command under the leadership of CP Ari Muhammed Ali has continued to give criminals, cultists, kidnappers and criminal elements in the state sleepless night, as operatives arrests scores of suspected armed robbers and others.

In a press statement e-signed and released to the National Association of Online Security News Publishers (NAOSNP) by the Command’s Spokesperson, DSP Edafe Bright stated that, “The Delta State Commissioner of Police CP Ari Muhammed Ali, FCIA, psc+ has reiterated that Proactive Policing is his watch word and modus operandi because it is better to prevent crime than reacting to it.

He said taking the battle to the den of criminals, arresting and prosecuting them will go a long way in deterring the minds of others who are thinking of going into crime.

Stop and search, intensive patrol and continuous raid of black spots/criminal hideouts and intelligence gathering are part of the proactive policing that the CP has directed Area commanders, DPOS, and tactical commanders to adopt. These proactive policing has continued to yield results as the command has recorded yet another major success against crimes and criminality.”

ARREST OF A SUSPECTED ARMED ROBBER AND A 77YEAR OLD GUN RUNNER/RECOVERY OF THREE DOUBLE BARREL GUNS AND TWO SINGLE BARREL GUNS: On 20/11/2021 at about 0500hrs following a distressed call that three suspected armed robbers were in the premises of one man (name withheld) along Ozoro/ Ughelli road.

The DPO Ozoro Division CSP Ogedengbe Areguamen led a combined team of Police/vigilante to the scene.

The suspected armed robbers on sighting the police teams took to their heels and the team gave them a hot chase during which one of the suspects named Emma Ighodalo ‘m’ of Irri village aged 28yrs was arrested with one live cartridge while two members of his gang escaped.

Upon interrogation, the suspect confessed that he threw his gun away somewhere in the bush as he was running and that he bought the said gun from One Michael Enipozi for the sum of #30,000.

The suspect led the Police to Irri village where the said Michael Enipozi ‘m’ of Irri in Isoko south LGA aged 77yrs was arrested. Three double barrel guns, two single barrel guns and other tools used in producing guns were recovered from him.

Preliminary investigation revealed that the 77yrs old suspect is a welder who produces guns for criminals and he admitted that he sold the gun to the suspect and that he has been in the business of producing guns for the past twenty years. Manhunt for the other two fleeing suspects is ongoing.

ARREST OF A 65YR OLD SUSPECT FOUND IN POSSESSION OF ONE HUNDRED AND THIRTY ROUNDS OF LIVE CARTRIDGES: On 19/11/2021 at about 1630hrs Operatives attached to the Command crack squad in total compliance with the directive of the Delta state Commissioner of Police on continuous raiding of black spot/criminal hideouts acted on intelligence gathered over a period of time and raided a criminal hideout at Emevor Community in Isoko North LGA and arrested one Solomon Udanya ‘m’ aged 65yrs.

The following exhibits were recovered from him; One hundred and thirty rounds live cartridges, one single barrel long gun, three packets of tramadol, six bottles of codeine and various contraband drugs. Investigation is ongoing.

3.ARREST OF SUSPECTED ARMED ROBBERS/RECOVERY OF ONE LOCALLY MADE PISTOL: On 17/11/2021 at about 1700hrs Eagle net patrol team while on a stop and search duty along Bomadi-Ohoror road intercepted a daylong unregistered motorcycle with three occupants namely Promise Jonah 27yrs “m” of Mbiama in Ahoada West LGA River state, Friday Frank 29yrs “m” of Esampou Community in Ekeremor LGA in Bayelsa but resides in Bomadi and Bekus Ayibe “m” of Ekeremor LGA of Bayelsa State respectively.

Upon a painstaking search on the suspects, one locally made pistol and two cartridges were recovered from Promise Jonah. Preliminary investigation revealed that the suspect Promise Jonah contacted the other two suspects and told them he has a gun and that they should look for a motorcycle to steal.

The suspect Friday Frank who resides in Bomadi boarded a bike and took the unsuspecting bike man to GRA water side in Bomadi where the other two suspects came out with the gun and threaten the bike man who submitted the keys and fled. Luck ran out of them when the Police team intercepted them.

Victim has identified all suspects as those who robbed him of his motorcycle. Suspects are currently in custody while investigation is ongoing.

The CP has assured members of the public particularly residents of the state that the command will continue to do its best to see that the state is free from crimes and criminality while urging them to continue to partner with the Police by giving useful, credible and timely information for effective policing.