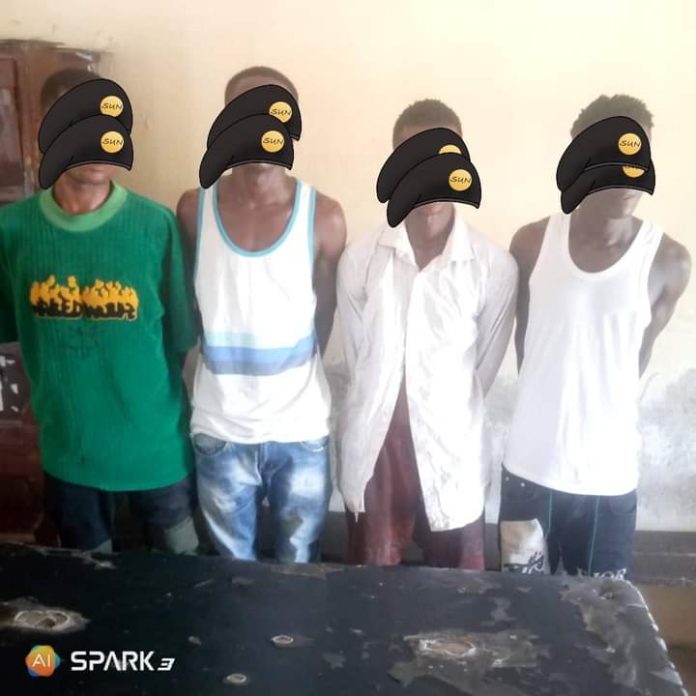 Operatives of Delta State Police Command have arrested Four murder suspects following the killing of a landlord over N20,000 disagreement in a failed contract.

In a press statement e-signed and released to the National Association of Online Security News Publishers, NAOSNP by the Command’s Spokesperson, DSP Edafe Bright stated that, “Following report received by the DPO Sapele Division from a distress caller (name withheld), that on 16/11/2022 at about 0900hours, he discovered that his landlord named Uguru Dominic ‘m’ aged 29yrs and his male friend name and address not known were found dead in the bathroom, suspected to have been murdered by unknown persons, and that the suspect made away with the victim’s Toyota Corolla car with Reg no. ABJ 271 white in colour, the DPO detailed detectives to unravel the mystery behind the deaths.”

According to the statement, “Consequently, the team swung into action, embarked on an intelligence led investigation which led to the arrest of one Ogadinma Francis A.K.A “Gentle”, aged 27yrs and the deceased Vehicle recovered from him.”

“Suspect confessed that he did a filling job for the deceased and after working for him, he refused to pay him the agreed amount. The suspect also stated that he conspired with his friends to commit the crime. Acting on his confession, the three accomplices namely, Goodnews Abaje ‘m’ age 30yrs, Obunwa Kasim ‘m’ age 25yrs and Bright Osifo ‘m’ age 23yrs were arrested.”

“They stated that the initial plan was to rob the victim, they tied them up till about 4:30am and then forced him to transfer the sum of thirty-six thousand naira (#36,000) to one of the suspects account.”

“They further stated that they decided to kill both of them because they felt the victims recognized them and will report them to the Police.”

Meanwhile, the Commissioner of Police Delta State, CP Ari Muhammed Ali FCIA, PSC+ has directed that the case be transferred to the State Criminal investigation department for further Investigation.